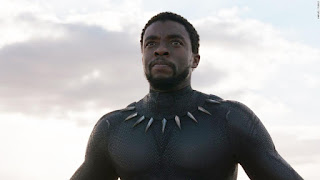 Hands down to “Black Panther”

I’m having some “What are you up to?” thoughts for this film when it comes to superhero films and comic-to-life adaptations.
Marvel’s eighteenth film is entering the worlds and the minds of Marvel Cinematic Universe. Gives a highly-anticipating, yet expensive look on the face to see Cooley and Chadwick Boseman working together to create this awesome scenery after Chadwick’s minor role in “Captain America: Civil War.” The cast and Kevin Feige, President of Marvel Studios and a man with great visionary to MCU films, done an outstanding job on keeping the Marvel superheroes and families easily energetic to the audiences.

The movie itself is extremely (and expensively) important on what was happening to the focus on the black lead character and the supporting characters. Every Marvel film, except for Iron Man 2, which I gave this film a D, all started out with a nice, soft tone for the character, the setting, detailed-backgrounds, and the action-packed performances. It was a smart move just like Iron Man and Benedict Cumberbatch’s Dr. Strange. Also, extra credit for the Easter eggs from previous Marvel media (a similar manner from Pixar films) and Stan Lee’s cameo, which made him big extra bucks.

The cast is easily-compared to the cast from Pixar’s Coco when Lee Unkrich have found the majority of the cast to be Latino/Mexican, which was the similar ingredient to Black Panther, using African Americans on a high-budget production. Disney always keeps the tradition of diversity films and score composing. The score and music background was a same stunt gig from Michael Giacchino (Coco) and Ludwig Göransson (Black Panther). My experiences for the score and the future diverse-films is somewhat problematic, but of course, easily overwhelming with excitement. Comic book writers, Stan Lee and Jack Kirby, created this non-white hero that would lead this character making an impact on shining the light on the characters’ eyes of Marvel Comics like Captain America, Iron Man, and Hulk.

The movie is a better [and suitable] choice for a February movie outing. This goes for Valentine’s Day, Black History Month, Lunar New Year, and people’s birthdays on February. I highly recommend this as an historic address to Black History Month. Of course, you minus will wait for a DVD release as take-home for your family. If you planning on seeing this film, then go straight to the movie theater rather than going out to dinner nor watch the Olympics (if you have time though). “Black Panther” is considered a Valentine’s Day treat for you. So, always save room for dessert and if you don’t like this film, don’t hesitate to ask.

Posted by Dallas Movie Screenings at 10:37 AM