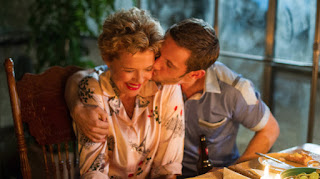 A Solid Romance that is Equally Charming and Heartbreaking. Jamie Bell and Annette Bening Make for a Great Duo.

Joel’s Review
*** (out of ****)
The young man with promise has his entire career ahead of him. The aging star has seen her spotlight readjust elsewhere upon the younger stars of the man’s newer generation. By the end of Film Stars Don’t Die in Liverpool, the title surely has adopted philosophical and psychological qualities atop its literal one. Neither party in this eventual romance ever expected to be involved romantically with the other. Each found himself or herself in a place of emotional vulnerability that the other strengthened in some way. For the young man, it was a maturity beyond his years that proved formative. For the older woman, it was a newfound attention that she had lacked in others for years.

For a while, Matt Greenhalgh’s screenplay (adapted from the memoir by Peter Turner) spends a lot of energy on the will-they-or-won’t-they dynamic that seems to be cultivated in a lot of such romantic melodramas. The fact that this story is at least based on a true one (to what degree would need to be discovered by further research than merely watching this movie) obviously doesn’t change that fact. Real life is real life, and cinema that aspires to reflect it directly is, to almost any degree, an exaggeration of it that involves a specific perspective. The telling of the story from either perspective will certainly color the story in some way that the reality of it is a bit warped.

Greenhalgh does a fascinating thing with one’s concept of perspective here, and it means that the frustration of the film’s melodramatic elements is decisively squelched at precisely the moment it counts. Until then, the story follows Peter Turner (Jamie Bell), the young stage actor with some talent but also a struggle for his “big break,” and Gloria Grahame (Annette Bening), a troubled startlet despite a surprise Academy Award victory some years ago. They meet and fall quickly into a physical attraction that becomes something more.

The drama oscillates between their families’ responses to the romance in the past (particularly given his naivete in such matters and her past proclivities involving romances with younger men) and Gloria’s declining health in the present. The back-and-forth energy between Peter and Gloria grows tiresome, but then the film clues us in when it shifts from Peter’s perspective of certain events to Gloria’s. That transforms Film Stars Don’t Die in Liverpool from a romantic melodrama to a melancholic meditation on mortality that ultimately delivers.
(Review by Joel Copling)