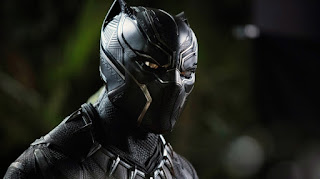 “Marvel Studios Black Panther”
Despite all the shortcomings and nuances, Marvel Studios “Black Panther,” like the myriad of other Marvel based superhero tales is a full-on otigin story to the title character who lives in the fictional country of Wakanda, a third world country that has tech and assets beyond its means. America was first introduced to this character and persona in 2016’s “Captain America: Civil War.”

Like the colorful “Thor: Ragnarok,” the studios have finally realized this stuff is mainly geared for the kids, since the humor and sarcasm are geared for the audience its meant for. Gone are the days of brooding characters with endless back stories filled with stifling tales galore. Instead, director Ryan Coogler fashions a tale that is equal parts fun thrill ride coupled with a minor dose of straight emjoyment and fun banter galore.

This tale finds T’Challa aka Black Panther (Chadwick Boseman) returning to his home of the fictional Wakanda after the death of his father. Involved in his life are his mom, Ramona (Angela Bassett), his uncle Zuri (Forest Whitaker), sister Nakia
Top 50(Lupita Nyong'o), as well as American colleagues in Everett K. Ross (Martin Freeman), who works for the FBI and villain Ulysses Klaue (Andy Serkis).

I like what Marvel has done with their product. Gone are the days of so-so flicks being produced just for the sake of retaining the rights to said properties. It all changed with Jon Favreau’s
“Iron Man” in 2008. But that is another story altogether.

With “Black Panther,” Coogler has crafted a fun thrill ride that should appeal to all the masses. Be warned that it clocks in slightly over two hours, actually 2 hrs. 14 min., but one will not notice it since they are having such a good time.

Grade: A-
(Review By Ricky Miller)