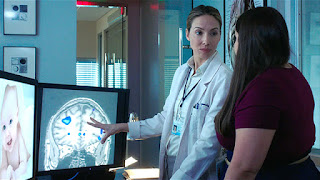 This excellent comedy with a touch of drama follows the life of Julia, a neurologist who seeks to prove that women are just as good as men in the brain. She does this by tackling the flaws perceived of women by society. The story begins with her continuous efforts to prove that men and women basically have all of the same starting components in their brain.

The film definitely walked the line well with its mix of comedy and serious notes. It did a brilliant job in illustrating how Julia’s obsession with the brain rendered her almost incapable of just being in a normal loving relationship. There were several fantastic performances by James Marsden, Whitney Cummings, Cecily Strong, the aforementioned Blake Griffin, Sofia Vergara and many others.

Whitney Cummings co-wrote and directed the film. She did an incredible job by bringing a feel good comedy that wasn’t fluffy as to ignore reality. In probably the most melancholy scene, Cecily Strong’s character, Zoe, has just quit her job and has to ask her husband, Greg, for starting capital for a business. We see that she is a strong woman against the discrimination of her sex and that her previous boss infused her work with discrimination. That was a good piece of the script that made one feel empathy for Zoe and a sense of sadness that she had to do what she did.

Julia develops a love interest with Jimmy, a participant in her neurological study, as she constantly combats his natural feeling of loving her. This relationship is basically the turning point for her. The way the script was written in relation to this connection was well executed to point out Julia’s flaws. How her passion and career overcame her ability to just feel loved was well illustrated.

Cummings brilliantly communicated for her role a sense of orderliness and constant focus. She transferred the message of her character being so straightforward that it was constricting her perfectly. This was a highly enjoyable film that consisted of a myriad of superb performances in a story of how complicated love and the brain is.
(Review by Wyatt Head)