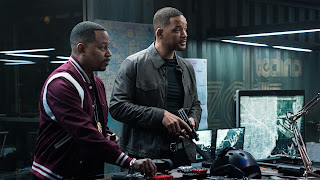 “Bad Boys For Life” (2020) -- This title finally came out in theaters earlier this year, sans Michael Bay, who was off doing other things, more specifically “6 Underground” with Ryan Reynolds for Netflix.

This tale finds two of veteran Miami cops Marcus Burnett (Martin Lawrence) and Mike Lowery (Will Smith), one of who just wants to retire. Smith’s Lowery is still up for all the action, something his nimble body is still used to. Marcus, on the other hand feels he has done enough for the people of the city and wishes to end his stint as a cop in blue.

Of course sewn into the plot are the other members of the Miami police force. This includes Vanessa Hudgens (“Sucker Punch,” the “High School Musical” franchise), and Alexander Ludwig (TV”s “Vikings,” “Lone Survivor”).

Gone are the fast paced quick cuts Bay used to employ. Instead, the audience is treated to the action from directors Adi El Arbi and Bilall Fallah who do a competent job of shooting their antics for the big screen.

The duo spent their careers on a variety of projects, including music videos and short films. Fallah directed 2018’s “Gangsta” He also helmed the independently made “Black” in 2015…

In the end game of things, this one turned out to be the best of the trilogy. Part 2 was too lengthy for its own good. It ran for 2 hrs., 27 min. That length to me is just ridiculous, since Bay and the filmmakers should have none better.

Also woven into this tale are the duo’s disclaimer they don’t want the other new cops singing the “Bad Boys” theme song. They explain it took them years to master it, and don’t appreciate them mangling their precious song.

The plot essentially revolves around a mother-son Kate del Castillo and Jacob Scipio tag, a tag team wreaking havoc all across the golden streets of Miami. The catch is that one of her sons is actual Lowery’s offspring.

Also involved Joe Pantoliano: as Captain Howard. He’s been in all of these tales, since the original in 1995.

So with all my reservations covering this trilogy, “Bad Boys For Life” actually turned out to be a tolerable piece of popcorn entertainment.