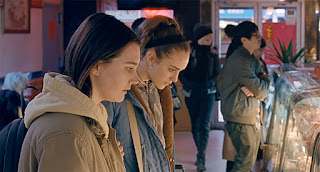 Review: Never Rarely Sometimes Always
Never underestimate the movie title to be questioned when the audiences and critics want to figure out why the filmmakers choose to name this film production, but as far as any drama films go, Never Rarely Sometimes Always is a film Eliza Hittman, the director, had offered to audiences at both film festivals and movie theaters, but Hittman always knows the palm of her hand when it comes to crafting a film that is only meant to be showcased at film festivals but deserves more attention than ever. And what is good news is that the film introduces the new actress Sidney Flanigan, playing the lead role as Autumn while Talia Ryder acts it out as her friend, Skylar. Just to let the readers know that this film is originally scheduled for March 2020 theatrical release, but due to the coronavirus pandemic, the film is instead released on VOD.

The film focuses on the teenage girl named Autumn (portrayed by newcomer Sidney Flanigan in her feature film debut) decides to get an abortion following her unexpected pregnancy which causes her to question whether she’ll be ready to be a mother or not.

While the film’s main characters Autumn and Skylar both portrayed as simple friends comparing to any teenage-girl films, the characters both shared the screen time together that fits the story miraculously with those two providing strong, but somewhat redundant character development that explores the ordeal lives of teenagehood and motherhood while living in the suburbs or city in their older teen ages (or younger adult ages). Teenagehood and motherhood are something that can be easily concerned once as the film goes by understanding what it means to be a teenager and a about-to-be mother at the same time.

The direction is well put together when shooting every scene that focuses primarily on those two young girls. Hittman knows where to place each camera and its angles to the right spot to capture a perfect, engaging shot of those two regardless of the difficulties she and the actresses had gone through. In the end, she managed to work tirelessly and on time without going back to re-edit anything or start the process all over again.

The film won the Special Jury Award for Best Neo-Realism at the Sundance Film Festival 2020, which was very hard to capture this enduring moment due to its distinctive flavor of being an European-made film or an Italian film (for which Neo-Realism is known for there). The main answer is not only Hittman’s direction did the trick, but also the cinematography work from Helen Louvart, and the scenes about parenthood and abortion that defines naturalistic artwork any film or television series could ever done. Cinematography and certain scenes needed to be filled and focused on are the basic ingredients to follow the recipe when producing an ordinary drama film.

Overall, Never Rarely Sometimes Always is an excellent movie, if not better. I really enjoyed it on every scene that caught my attention. It’s a rare deadpanless film with a huge tendency that intrigues and woes the audience and critics out of their minds when talking about extraordinary films. The director, the two main actresses, and the cinematographer both did a wonderful job of putting this graceful story piece together. I honestly don’t care what other movie critics say, but I say this, Never Rarely Sometimes Always is a great viewing pleasure at home. You will love it. Trust me!


GRADE: A
(Review by Henry Pham)