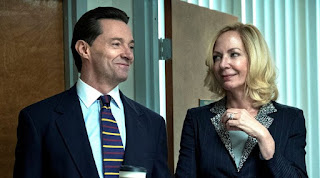 “Bad Education” -- This HBO movie stars Hugh Jackman, Alisson Janey and Ray Romano. Also important to the tale is supporter Kathrine Narducci as student Sharon Katz, who does an expose piece on Janey’s Pam Gluckin, who was embezzling money for her own self gain.

Upon further investigation, it was Jackman’s school higher-up, Frank Tasso who was the one doing the embezzling. This movie does a credible job of showing what happens to people when they are given positions of power.

As far as roles go, this is one of the better parts Jackman has on his resume, even going back to duds and misfires like “Deception,(2008), “Pan” (2015) and the letdown that was the Gary Hart biopic “The Front Runner” in 2011.

He is just a fun enjoyable actor to watch.

He was great as the computer hacker in the crazy as all get out “Swordfish,’(2001), “Kate and Leopold,” (2001). One of his starring roles of merit was his lead turn in Christopher Nolan’s “The Prestige” (2006). He was aces as illusionist Robert Angier, who gets in a competitive streak with rival Christian Bale, who just wants to end up on top.

“Bad Education” for all intents and purposes is just an enjoyable tale that proves true life is sometimes stranger than fiction. When the story opens, the high school was touted as the fourth best in the state.

By the end of this witty and well constructed tale, the Roselyn High was at the pinnacle of their prestige, with the top ranking in the state of New York.

Directing chores for “Bad education” were handled by Cory Finely who helmed the little seen “Thoroughbreds” with Olivia Cooke and Anya Taylor-Joy. It was the last movie done by the late Anton Yelchin.

“Bad Education” is a must see for anyone who just wants o see an enjoyable and engaging flick all around. It is worth both the time and energy, since it just a solid piece of entertainment.