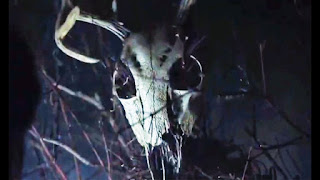 THE WRETCHED
*½ (out of ****)
The Wretched is another of those movies in which some supernatural threat lurks in the shadows of a seemingly comfortable suburbia. That is, it would lurk in the shadows, if not for the insistence of its writers/directors, the Pierce Brothers (Brett and Drew), to show off some pretty neat makeup effects work in constricting close-up. The demon in this case is credited as “the Wretch,” and he, she, or it is played by Madelynn Stuenkel, for whom this role is a first-ever credit. A spot of research finds that Stuenkel was trained in stage combat as a theatre performer specializing in movement, which makes perfect sense: The Wretch contorts his, her, or its body into some seemingly impossible positions. It’s just a shame that a being such as this one, with so much promise, is wasted on the movie around it.

This is to say that there isn’t much to the movie around the Wretch, whose origins are rushed through in a quick montage of phrases on an online encyclopedia, as searched by the protagonist of this story. Ben (John-Paul Howard) has just moved in with his dad (played by Jamison Jones) for a summer away from his mother. Mom and dad are divorced, and Ben spends the first few days in sullen silence, watching from afar as Liam, who manages a nearby boating pier, connects romantically with fellow manager Sara (Azie Tesfai). Meanwhile, Ben himself flirts with co-worker Mallory (Piper Curda) and takes notice of neighbor lady Abbie (Zarah Mahler), her husband Ty (Kevin Bigley), and their two kids, all of whom begin to act strangely.

Eventually, the two kids disappear. Ben is convinced that Abbie is at fault, until a darker force reveals itself – to Ben, through suggestion and, to us, through the Pierces’ shallow implementation of scare tactics. The being, which follows rules as intriguing as they are random, passes in the background of shots, emerges from chest cavities in others, and, otherwise, possesses characters at the drop of a hat (whose performers often simply glare unblinkingly at Ben, which isn’t as creepy as it should be). The humans, mostly Ben, are idiots when it comes to dealing with these dark forces, investigating strange noises from shadowy areas and otherwise ignoring entirely the suspicious things happening in front of their faces.

Howard is wooden as a lead, seeming untested and not confident in the material given to him, and nothing is worth discussion with the other performances. The plot has the basic and expected structure of a supernatural horror film: a prologue that introduces the central threat, the opening act that introduces the chief protagonist, an extended middle act comprised of that central threat being a horror movie villain, and a rushed action climax, which here is polished but still aggressively loud, in which the dark force either is or isn’t vanquished. The Wretched introduces only two variations on this: a twist within that climax, which suggests the film’s perspective was an act of trickery, and an ambiguous final shot, which hints at more danger on the horizon. We have no reason to care by this point, though.
(Review by Joel Copling)