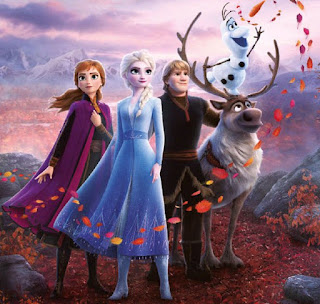 How and why this thing got made comes down to the almighty dollar. This one is enjoyable, but it lacked originality and pizzazz of the 2013’s “Frozen.”

Disney wants to hold onto their possessions, but at some point, in time they will just have to make due with what they are given. This flick manages to strike then right chords, since I did get those goosebumps at least once during the various song and dance numbers.

So readers know, I’m reviewing this again since it is one of the upper tiered titles on the Disney + app.

That, however, was a bit hokey and superficial in spots since everything felt too staged in spots and sequences.

There is an entire sequence that reeks of an old-time 1980’s music video wherein one feels the cheese and rolls their eyes and surprised this became part of a theatrical film.

“Frozen II” deals with Elsa’s running away from home (again) and trying to figure out her place in the kingdom in which she resides. It is flourishing town, but somewhere in the past some unsavory events occurred.

The problem with “Frozen II” is that it feels like it just wants to exist to sell merchandise and the like. I had fun, but at some point, it just feels too forced.

At some point in time, the events that occur feel like a sitcom that has ran for just too many seasons.

With “Frozen II,” he delves into some deeper parts of the storyline in which the past comes back around and gives a touch of life lessons that are important for that easygoing feeling.

Lee also directed the enjoyable and sentimental “Frozen” short “Frozen Fever” in 2015. It ran before Kenneth Branagh’s “Cinderella” update that same year. Lead Lilly James was great in the title role, a part she was born to play. I enjoyed that one because there was not a plethora of song and dance numbers throughout. Branagh just made a great story even better, since he put all his energy into making a family flick fun again.

I would recommend “Frozen II,” despite the forced aspects of the storyline. It does what it’s supposed to do in that it reintroduces a bunch of people the entire family can love.