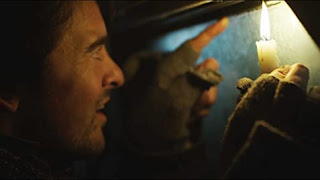 Review: Centigrade
People have a soft spot when it comes to survival films or films that feature characters with near-death experiences on the way. This thriller was based on the true story based on the events and features the director Brendan Walsh in his directorial debut and the stars of Genesis Rodriguez (Big Hero 6) and Vincent Piazza (Boardwalk Empire) in their main leading roles.

The story starts with the married couple traveling through the arctic mountains in Norway for the book-signing event, but after pulling the car over during the snowstorm, they are both trapped in their car, which was buried under the layers of frosty snow and ice. With that, they must find a way to survive amid ice-cold weathery temperatures and the hallucinations without freezing themselves to death.

Director Brendan Walsh and the writer Daley Nixon have put their survival skills of storytelling to the test on crafting this wintry thriller that brings the audience down for the trip to the winter wonder/waste-land. The film gives the feel of how most films took influence from most of the wintry, survival films (including Ice Age, The Day After Tomorrow, etc.). Walsh not only wants to make a comparison to any films that have been placed on a thriller section, but also on the disaster-film genre.

Without any hard questions, the characters, some parts of the story, and scenes are very hard to digest since the director overdid the second half of the film with dangerous, scary obstacles without CGI usages to be inserted simultaneously as if a puzzle piece that needs to be placed on the right spot based on the images that matches the cover box. Especially when a piano forte-fingering movements being played in the background that gives the film a putrid feel of a dark-alley scary movie, which was composed by Trey Toy and Matthew Wang And what can be utterly confusing and surprising is that there aren’t many locations onscreen since the director and the writer have spent much of the time treating the film as a dangerous, adventurous survival guide for thirteen-year-olds as well as paying solely attention to the scenes being filmed inside and outside the car in the middle of nowhere.

Over the top, Centigrade is not bad, but not enjoyable. I just really wish there’s a lot more locations and more challenging obstacles to fully digest and be satisfied with, mostly focusing on the second half of the film for more amusement. Only Genesis Rodriguez and Vincent Piazza are what makes this film very interesting to see. I’m not sure what to tell, but it would be a difficult decision to choose which film to watch.