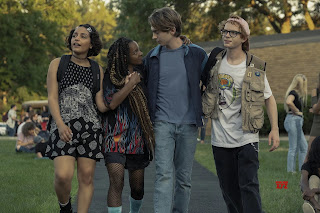 Chemical Hearts is a scientific method but falls short for the chemical experiment.
By recalling the “boy meets girl, boy loses girl, boy gets the girl” lecture from books and movies, Chemical Hearts is a teenage, romantic film that primarily centers the concern on their relationship between a young boy and a young girl. The film is heavily based on the novel Our Chemical Hearts by Krystal Sutherland and it is written and directed by Richard Tanne. The film also consists of the main lead-acting duets of Lili Reinhert (The CW’s Riverdale) and Austin Abrams (The Walking Dead) who portrayed their respective roles as Grace Town and Henry Page, the two high school newspaper-editing students.

Chemical Hearts follows a high-school student named Henry Page who pursues his role as an aspiring writer and editor in a high school newspaper organization as well as having high hopes of being admitted to a four-year college with his happier life of studying. There, he meets and befriends a new girl, Grace Town, who also joins the club as his assistant editor.

After overseeing and reading Sutherland’s story, aspiring director and writer Richard Tanne has decided to craft a film that takes the teen audiences and adults to an imaginary high school life with the duo of high school journalists. He really knows how to demonstrate the behavior between those two high school characters and produced much more character developments than any other romantic movie for that matter, utilizing the old High School Musical film, dated back in 2006, as well as any teenage films involving a relationship between a teen boy and a teen girl for inspiration. Though, he went far for making the characters drop some small F-bombs throughout the film.

Tanne also directed Southside with You, a film that centers on a young relationship between young Barack Obama and Michelle Robinson (both portrayed by Parker Sawyers and Tika Sumpter respectively) that was dated back in the late 1980s.

Part of the story’s dynamics involve the struggling, yet slow-and-steady relationship between Henry Page and Grace Town. Henry Page is a normal student while Grace Town is a life-struggling, sadistic student whose boyfriend passed away from a tragic accident. Their chemistry never dies down when a person deals with horrific past memories. It's a romantic interest that never goes anywhere and never leaves anywhere. Somewhere along the way, the sparks sputter homogeneously and fall somewhat flat. Lili Reinhert and Austin Abrams’s characters both provided some mental recalls from Parks and Recreation that features Ron Swanson’s character towards his love interests in the show and Forrest Gump that focuses on the chemistry of Forrest and Jenny.

This is a kind of film not to be taken too seriously for a romantic-genre getaway, even though part of the storyline involves Reinhert’s teary character who shreds her feelings into darkness that triggers the emotions towards the audience, maybe quite a few people or moviegoers per day.

Despite the language and stringiness to the characters’ affairs being shown, one could do worse than taking this enjoyable ride on the train-of-thoughts to guilty pleasureland. Chemical Hearts is a 90-minute ok-movie, but not entirely enjoyable when it comes to selecting a romantic movie for anyone’s personal viewing pleasures out there. Lili Reinhert and Austin Abrams’s performance are what makes Chemical Hearts fun to watch. I say this, I really don’t hate it, but I really don’t love it altogether, but if you’re interested in seeing this film, be my guest.