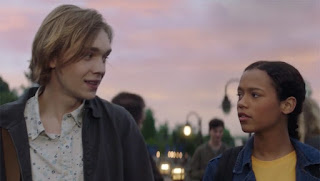 Words on Bathroom Walls is a hope-and-glory treat for teens and young adults.
The world needs a film that motivates and inspires them to be themselves regardless of their differences and difficulties all around while growing up, whether it was school or college-related or other things that troubles them the most. Words on Bathroom Walls is a teenage, coming-of-age drama film for both teens and younger adults out there. It is heavily based on the story written by Julia Walton with the screenwriting duties coming from Nick Naveda. Words on Bathroom Walls is directed by Thor Freudenthal (Percy Jackson: Sea of Monsters) and features the leading star of Charlie Plummer (HBO’s Boardwalk Empire, All the Money in the World) as the main character Adam Petrazelli, while Taylor Russell (Escape Room), AnnaSophia Robb (2005’s Charlie and the Chocolate Factory), Andy García, Molly Parker, and Walton Goggins came forward as the film’s supportive characters to Adam Petrazelli.

The film starts with Adam Petrazelli, a disabled teenager diagnosed with schizophrenia who dreams of becoming a chef, though his main problem is that his condition with schizophrenia forced him into expulsion from school and he learns that he must face certain, difficult challenges he comes across in order to learn how to be honest and brave after going through lots of struggles.

The plot line has a facsimile texture compared to any films involving a disabled character like Forrest Gump in the titular film, Rain Man, and Pixar’s Loop short film which was shown on Disney+. It brings to a certain kind of story based on one’s personal life who is diagnosed with a learning disability like autism, dyslexia, ADHD, and other disorders. The study of those disabilities shown in the film became a direct principal dynamic to Charlie Plummer’s character's entire journey throughout the film. It’s a ticket-to-inevitable when it comes to adapting normality and school life as both a student and a visual learner.

Directing chores for Thor Freudenthal based on his creative work on Hotel For Dogs and Percy Jackson: Sea of Monsters, he does know how to operate heavy machinery not only on the camera, but also on those foggy computer graphics in various scenes featured in the film as well as providing a stingy visual and special effects mixed together in such lubrication. Even when it means to take some time collaborating on screenwriting with writer Nick Naveda into getting the right consistency on the chemistry between Charlie’s and Taylor’s character, the scenes involving Adam’s troubles and issues, and the story altogether without stress. Even by means of orchestrating the composers, the Chainsmokers, on placing the music and the horrific sound effects from each of the homogeneous CGI-graphical climactic scenes.

Though one of the biggest complaints on the film is the action of abuse towards the main character, which became a main threat for both the Adam character and the film as a whole. Abuse is something that overpowers the authority of one's main superior in education and fulfilling one’s dreams. It becomes somewhat a recipe-for-disaster moment when schools and colleges are widely considered dangerous places to be all around for safety reasons for children and adults.

When it all comes down to it, Words on Bathroom Walls is a great movie. This film is heavily based on my alley on how I can deal with these situations like this. Same applies to those who have learning disorders who have suffered hard times with families and friends as you grow up in different parts of the world, at schools, and at workplaces. With that being said, the director and the cast did an outstanding job and I dear say, whether you like it or not, Words on Bathroom Walls is worth every penny at the movie theater and at home for your convenience.