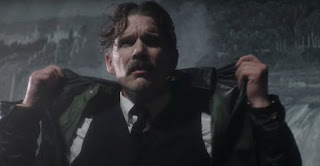 Ethan Hawke’s Tesla is a well-oiled machine!
There was another film called The Current War, released in 2017, with similar structures on the story and the characters, but my mind is like a steel trap when Tesla can be often mistaken for a car film, for instance Ford v. Ferrari but for that answer, Tesla is actually a biographical, drama film based on the life of the visionary inventor Nikola Tesla, the founder of Tesla, explaining the premise of his history and career as an electrical engineer. Director Michael Almereyda (2000’s Hamlet) calls the shotgun to helm this fascinating film while actor Ethan Hawke stars as Nikola Tesla. The cast also includes Eve Hewson, Ebon Moss-Bachrach, Jim Gaffigan, and Kyle MacLachlan in their supporting roles.

The film centers on the electrical engineer and freewheeling inventor Nikola Tesla who has had a history with Thomas Edison and JP Morgan’s daughter, Anne Morgan, unveils his breakthrough and his prestigious vision on discovering the electrical power and the light from the thunder in the late 1800s.

Director and writer Michael Almereyda has his team to put all the pieces to the puzzle on every single spot and scene nonstop. Almereyda overworks the cast and crew to make sure that everything is perfect and well told accurately based on Tesla's life and career, as well as how the action goes without the massive usage of CGI. Though, special effects being used can be seen and heard which gives the film more proper depth and much more structural integrity for that film’s well-oiled machine flavor, a similarly facsimile stunt coming from 1996’s Twister featuring the late Bill Paxton. The filmmakers also used another film called The Current War, released in 2017, for inspiration for the film’s storyline down the line.

Here in the film, Ethan Hawke portrays Nikola Tesla, providing the voices being mixed with Willem Dafoe and Keanu Reeves altogether for strong character in the background, the endurance of Matt Damon from Ford v. Ferrari, and the personality traits from any real-life visionary inventors like Henry Ford, Thomas Edison, Benjamin Franklin, and others being named. Hawke have previously collaborated with Almereyda since 2014 with their recent film Cymbeline. The film also has Eve Hewson as Anne Morgan who becomes a supportive guide to Hawke’s character throughout the film that can expand Tesla’s persona for the audiences to know more when it comes to character developments. While that's been going, actor Kyle MacLachlan (ABC’s Twin Peaks, Dune, Inside Out) receives an on-and-off screen time as Thomas Edison.

Lastly, the film ends with Eve Hewson’s Anne Morgan breaking character by revealing her fourth-wall breaking narration which gives a fine, structural appeal for the audiences and critics. Also appearing in the film are Hannah Gross (Joker, Netlfix’s Mindhunter) and Donnie Keshawarz (Ad Astra) who plays the role of the business chief JP Morgan.

Overall, Tesla is a great film, if not better. Ethan Hawke, whom I met in person in Dallas a few years back, really did an outstanding job on nailing his role on every scene to scene while the director Michael Almereyda fulfills his destiny on producing this prestigious feature film that questions the audiences and viewers on what goes around comes around. I would say Tesla is a must-see if you’re planning on selecting a digitized film at home. What decisions of any films can be made or to choose from is beyond me. Tesla is a well-oiled machine!