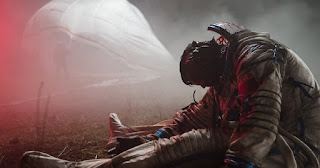 The film was originally going to be released in theaters as part of the Tribeca Film Festival until COVID-19 prevented it.
Originally and supposingly, Sputnik is thought to be an epic space film based on the title compared to any science fiction films that are set in outer space (compared to the massive successes from Star Wars, Star Trek, Sandra Bullock’s Gravity, WALL-E, and others you named), it is actually a Russian science fiction horror, B-category film directed by Egor Abramenko in his directorial feature film debut. The film features the cast of Oksana Akinshina (The Bourne Supremacy) as Dr. Tatiana Yurievna, Pyotr Fyodorov as cosmonaut Konstantin Sergeyevich, and the Russian actor Fyodor Bondarchuk (The Inhabited Island, 2008–2009).

The film centers on the young Russian doctor Tatiana Yurievna who is on the precipice of losing her medical license. After she’s recruited by the military, Tatiana is brought to a secure science research facility to assess a very special case, that of Konstantin Sergeyevich, a cosmonaut who survived a mysterious space accident and has returned to Earth with a unique condition: a mysterious creature living inside of him that only shows itself during the late evening. The military has nefarious plans for it. Tatiana wants to stop it from killing Konstantin. And the creature itself thrives on destruction.

First-time Director Egor Abramenko has taken much inspiration and influences from several of the following science fiction films, including James Cameron’s Avatar, Steven Spielberg’s E.T. the Extra Terrestrial, and Ridley Scott’s Aliens, to build up the endurance for the smooth, pacing plot down the line. He does know how to handle the camera for fluid situations involving monstrous creature’s scenes, giving the fact that he treats this film as a monster-movie like Godzilla. Even if it means working hard with the visual and special effects crew to achieve a subtle, yet powerful conflicting exposures all around.

The plot and the characters move along at a nice clean pace, but when they all come down, the film is like another E.T. or Aliens direct sequel.

And that’s it, Sputnik is an nearly-two-hour average film, kinda decent in my brutal honest opinion. It’s not a horrible movie nor a good movie at the same time, it’s just extremely uncomplicated and not very complexible to watch. And that is all I have to say, I can’t give away too much. I believed the director over done it as if there’s too many things to put all in one box without throwing things away. I hate to say this, but I think you should reconsider selecting another movie at home, that is, depending on who you are.