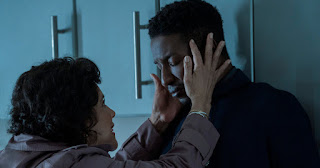 
Thrillers can be something exciting, but also nervousing and scary for one’s own movie-viewing advantages. Black Box serves as a directorial debut for Emmanuel Osei-Kuffour. Before he directed this, he has directed several short films over the years. This film is the first of the eight films to be given a Blumhouse Studios’ deal with Amazon Studios under Blumhouse’s own television division. Actors Mamoudou Athie (Sorry for Your Loss) and Phylicia Rashad (NBC’s The Cosby Show) were given the main-leading roles while producer Jason Blum will be serving as an executive producer for this film.

Black Box centers on the man named Nolan, who, after losing his wife and his memory in a near-fatal car accident, undergoes an agonizing experimental treatment that causes him to question who he really is.

Mamoudou Athie portrays Nolan as a patient who suffered amnesia and injuries on his hand while Phylicia Rashad as Lilian, a doctor who performs an experimental surgery on him. Aside from those two, child actress Amanda Christine appears as Ana, Nolan’s daughter while Tosin Morohunfola (CW’s The Flash) plays as Gary.

With the script and the dialogue being delivered to the two main characters by Wade Allen-Marcus and Stephen Herman, the writers and director took every step and direction on filming a horror film based on Peele’s horror/thriller films, giving each scene some distant flavors from Peele’s experiences and borrow some of the tips and tricks from several Christopher Nolan’s films, including Inception and his most-recent film, Tenet. The film did include the usages of virtual reality on some scenes while most of the filming crew outdone the CGI parts, but from the looks of it, they both find a way to make the scenes happen compared the films being mentioned and following the recipe from the subtle Paranormal Activity film series. Additionally, the music coming from composer Brandon Roberts provides a wondrous, yet steadily musical beats to fit that genre for any horror films, like Jaws for example.

While the film is unique to watch, there are some difficult parts of the film that are extremely hard to digest scene by scene, which are the scenes with him remembering the things which gave myself some shivers, the violence being used in the second half of the film despite that there’s a child in the scenes, and the cutting-edge of the CGI usages which lacks focus on the characters and the film itself. My instinct is that filmmakers are putting much much effort into every scene being discussed at length. Over the top, the plot seems to flow gently and somewhat flawful.
Also appearing are Troy James who portrays as a silent Backwards Man who comes horrifyingly into Nolan's scenes and senses while being experimented by Lilian and Najah Bradley who appears as Rachel, Nolan’s late wife. And lastly, despite appearing almost the end is Donald Watkins as Thomas.

Black Box is an okay film, it clocks around 100 minutes to its regular length. Though I did not enjoy parts of it due its excruciating amounts of dark focal natures and the tone of the film. I kinda say, the director and the crew did it, but it’s just too much for that input as if people add too many candies in the bowl or bag just to make this film amazing and anticipated to watch for anyone's amusement. Speaking of horror films, Black Box may be the most nervousing choice for a movie-viewing pleasure at home as a Halloween treat for adults.