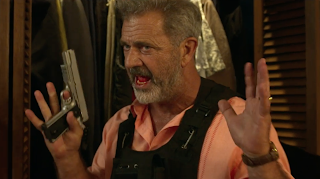 I can’t believe how far has star power has fallen.

I, of course am talking about Gibson who used to be on the top of most moviegoers must watch lists. More recently, he directed the war action picture “Hacksaw Ridge,” (2016) which won multiple Oscars.

With his latest entry, “Force of Nature,” he is a grizzled cop who does not want to leave his residence despite the category five hurricane outside the front door of his high rise.

I am of the rare breed that could care less about his behavior in that I just want to see him on the big screen!

In “Force of Nature,” he tackles the grizzly cop role again as Ray Barrett who refuses to leave the high rise in which he resides. His nurse daughter, Troy (Kate Bosworth) oversees his life and is by his side. He resides in a foreign land: South America.

This one, however is all about the heist.

The bad guy here is a villain named John (David Zayas, TV’s “Dexter” (2006), “The Expendables” (2010), a mean-spirited baddie who indiscriminately kills people for just being in the way. In a nice change of pace, the almighty dollar is not the endgame reward.

Directing chores for “Nature” were handled by Michael Polish, who handled the intriguing “Northfork” in the early part of this decade, (2003) to be exact. He handles the pacing well, but the end result is merely “meh,” since this one does not end with a bang, rather a somber whimper.

What I’m waiting for net is both the prequel to his “Passion of the Christ” and yet another “Lethal Weapon” entry. They might be older, but they are not in wheelchairs yet.

So the reader knows I watched this on Amazon Prime.

If one has the time, “Nature” is worth the journey, despite the meh comments as well.