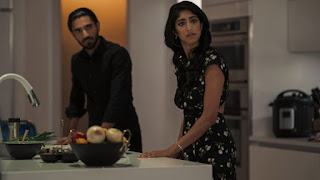 Upon reviewing the poster and the trailer, my mind is heavily believed to be a horror/thriller film, it turns out that this film is meant to be horror and romantic film altogether, which is pretty new to my viewing pleasures. Any romantic film is not about the relationships between a boy and a girl, it’s about friendships and family. To be precise, not all films center around the boy or girl who gets the relationship of someone from the very beginning to the very end as part of the film’s complex. Evil Eye is also joining in as one of the films being part of the main Blumhouse horror features for that lineup, along with Black Box and The Lie. The film is directed by Elan and Rajeev Dassani and stars Sarita Choudhury, Sunita Mani, Bernard White, and Omar Maskati. Producer Jason Blum and actress Priyanka Chopra will also serve as executive producers for the film.

Evil Eye primarily focuses on the complicated relationship between a mother and a daughter named Pavvali, with the latter having a new boyfriend whose about to become Pavvali’s husband, of which her mother disapproves and fears due to her boyfriend being the connection of her darkest past that ends up coming back.

Under the direction from Elan and Rajeev Dassani, the duo took every ounce and steps to build up a fine piece of work that includes adding some Indian-Asian cultural values and concepts of reincarnation to the family focus. Along with that, the directors and the producers throw Choundary’s character some karma-meditation practices that affects her meddling, somewhat dysfunctional relationship with her husband and her daughter as the film progresses. Choudhary’s character as Pavvali’s mother carries the main screentime as her darkest past triggers her PTSD hypnosis. Her past and backstory flash with violence as her experiences with an abusive boyfriend, who refuses to accept rejection and moving on with his life, endangers her and her daughter, which is what makes the film very interesting to see for both audiences and critics out there with the impeccable balance between mother-and-daughter time and a girl-meets-boy nature. Even when the music from Ronit Kirchman sounded ambiguous for that old-school Indian-Amercian tradition.

On the downside, the only big problem is the script for that New Orleans setting which doesn’t have any cultures nor all-things Louisiana related as the setting is shown to be highly technological. From the looks of it, the city looks like it’s from either New York or any big cities outside of Louisiana just to give it a strong elevation between the main focus on any city in the U.S. and India. Over the top, the plot and the story flow really slowly and smoothly as if any actor or filmmaker knows how to play their cards right. Another one is the directors overdoing the making of Omar Maskati’s abusive character rather than focusing on the two main characters.

Overall, Evil Eye is really ok for that 90-minute feature presentation. I can hardly notice that this film is a taut thriller or horror that remains engrossing with a fabulous twist of romance blossoming in the air and bringing some cultural perspective of supernatural darker tones that highly-spring into the family drama for a mother-daughter focus onscreen. Thank goodness for visual aids because my description of that and my ways of brainstorming for this film are pretty confusing. If you want to watch this movie, be my guest and go watch it. If not, then pick something else.