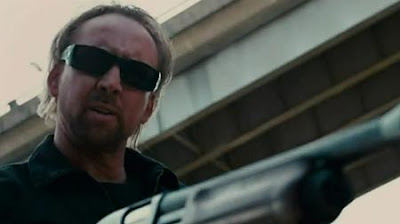 Basically the only thing you need to know about this movie is that it stars Nicolas Cage and it involves cars and guns. Milton escapes from hell and chases after the man who killed his daughter and kidnapped his granddaughter. Surprisingly the 3D is actually done well.

As the story begins you don't really know that Milton escaped from hell. He is chasing some guys in a truck and wrecks serious mayhem on them while extracting information as to the whereabouts of a girl. He has flashes of the horrific fate of his daughter who joined this satanic cult run by smooth talking Jonah King (Billy Burke). Sitting at a cafe he notices feisty small town waitress Piper (Austin's Amber Heard) just quit her job and who happens to have a souped up vehicle. Fixing her car when it breaks down she gives him a ride. Milton later saves her from some serious domestic abuse and they hit the road together. Enter this slick guy in a suit, calm, walking, literally smelling out Milton's trail. He calls himself the accountant (William Fitcher). Apparently he's after Milton to take him back. But Milton has other plans. He's after the satin shirt and skull ring wearing King who has plans to sacrifice the missing baby.

There are multiple car chases, fist fights, gun play and a ton of explosions. All the elements usually found in Nic Cage movies as of late. Be warned, for those parents who insist on bringing their kids, there is some nudity besides all inventive violence. Director Patrick Lussier who did My Bloody Valentine also wrote the story with Todd Farmer. What could have been a mindless action flick has infused the premise with some humorous tones by not taking itself so seriously. Some of the special effects were at times very cheesy especially at the end. Amber Heard who was honored at last year's DIFF with a Rising Star Award is perfect eye candy, but no substantial reasons are given as to why she is willing to follow Milton on his mission of revenge. She manages to give Piper a fuller character than just another pretty face. Even though she never seems to show any wear and tear or mussy hair after going through head to head fights. Look for David Morse to show up as Milton's friend Webster. It is William Fichtner who steals the movie with his dry, witty merchant of death. He's the best thing about the whole movie. And that alone is worth the popcorn.
(Review by reesa)