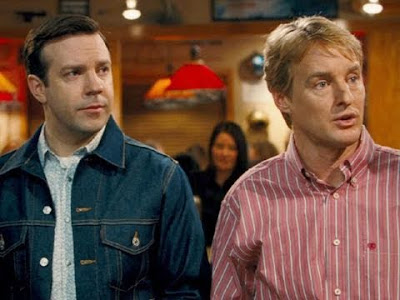 With a Farrelly Brother's movie you can pretty much guess your are in for a silly raunchy time. Bobby and Peter Farrelly who have done Dumb and Dumber and There's Something About Mary, continue the trend of portraying immature men chasing women and doing stupid stuff. Rick and Fred are middle aged married men who still think they would have game if they were single. Their wives decide to let the “boys” have a week off from their marriages to get the wild hair out of their systems. They give them a “hall pass” where they can do anything they want.

Rick (Owen Wilson) is married to Maggie (Jenna Fischer) and they have three kids to whom he is devoted dad. His best buddy Fred (Jason Sudeikis) is married to Grace (Christina Applegate) who makes her husband think he's getting away with spying women on the sly. Maggie overhears the boys poker night conversation about how much they would pay to do anyone they wanted without repercussions. Dr. Lucy (Joy Behar) suggests that sometimes couples need to take a break so they can come back refreshed and more appreciative. Maggie and Grace tired of their husbands constantly ogling other women decide to issue them a “hall pass”. Their excited husbands treat the upcoming week like Spring Break by renting a room at the Comfort Inn. No awkward pictures of their kids on the wall if they were to take women to their houses. Their poker buddies decide to live vicariously through them by hanging out to watch them pick up women. Rick and Fred are so everyman normal dressed in plaid shirts and dockers thinking they are going troll for hot chicks at the local Applebee's. They guys are stuck at their 20 year old selves and their clueless mindset is the basis for most of what happens after that.

There is plenty of off the wall humor and body parts (NOT for kids). Wilson and Sudeikis are believable and pathetic as immature men going through a middle aged crisis. Fischer and Applegate come off looking better and their week off may have been more for them than their men. Richard Jenkins is a welcome relief as Coakley their rich superstud friend who becomes their Obi Wan in the ways of picking up women. You may wish the movie was about him. If you like the Farrelly Brother's previous films, then you will probably enjoy this one, but you may wonder if any minute Adam Sandler or Ben Stiller will show up.
(Review by reesa)

Posted by Dallas Movie Screenings at 1:17 AM