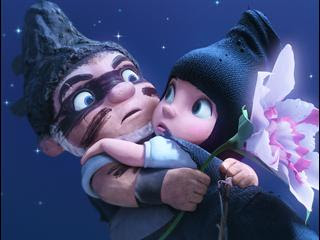 Did you ever wonder what your garden gnomes do when you are not looking? According to folklore gnomes awaken at night and magically transform your garden. Disney has recreated Shakespeare's classic tragic love story Romeo and Juliet using red and blue gnomes of battling neighbors Lord Capulet and Miss Montague and of course they live on Verona Drive.

The warring humans live in a duplex, their yards divided by a fence. When they leave their houses the weather vanes alert the statuary when it's safe to transform. Besides tending their respective gardens, the on going challenge between them is fought in the alley with souped up lawn mowers. Gnomeo (James McAvoy) is the young adventurous male of the blues. He races Tybalt (Jason Statham) a red bully with a flower on his belly. Tybalt cheats and causes the blue lawnmower to be ruined by a passing car. Tempers are raised and the blues want revenge. Meanwhile Juliet (Emily Blunt) the sheltered daughter of Lord Redbrick (Michael Caine) leader of the reds sees a beautiful orchid growing from a rundown greenhouse in the next yard. She sees this is her opportunity to contribute something of worth. Wearing a sock like a ninja costume she sneaks across the fence. Gnomeo dressed like a guerrilla to cause some damage to the reds sees her and is immediately smitten. In playful competition they fight over the flower. When they crash and their disguises reveal their colors, they are aghast and confused.

Director Kelly Asbury and a boat load of screenwriters loosely adapted the Bard's tragic romance into an Elton John musical comedy with plaster gnomes for kids. The animation is quick remarkable which in 3D looking and sound fairly photo realistic. It's fun to watch the characters have to transform to inanimate objects no matter what they are doing when faced with humans. Smaller kids may recoil at the “tragedy” of some characters getting shattered and a monster lawn mower Terrafirminator (Hulk Hogan) that wrecks havoc, but no worries, it all comes together at the end. The mood is highlighted by the supporting characters like a pink plastic flamingo (Jim Cummings), a Bambi deer (Ozzy Osbourne), Rosanne the frog (Ashely Jensen), Dolly Gnome (Dolly Parton) and Maggie Smith as Lady Bluebury, Gnomeo's mother. Shakespeare even has a bit part voiced by Patrick Stewart. The movie works as a nice introduction to the classics for young kids, and Elton John's 70's hits are for the parents that will have to accompany them.
(Review by reesa)

Email ThisBlogThis!Share to TwitterShare to FacebookShare to Pinterest
Labels: Gnomeo and Juliet review