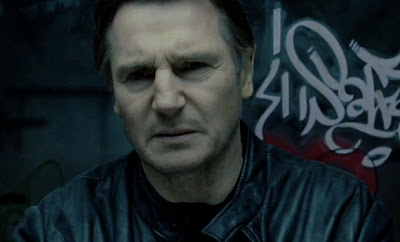 Dr. Martin Harris and his lovely wife Elizabeth are flying into Berlin where Martin is set to give a speech at a symposium. The cab driver forgets to include his briefcase so Martin has to rush back to the airport. An unexpected accident causes the cab to crash flying over a bridge into the winter river. The female cab driver manages to save him, but it leaves Martin is in a coma for four days. When he is awakened he has no ID on him and his memory is still foggy. He seeks out his wife but she doesn't know who he is, and there's someone else claiming he's her husband, Dr. Martin Harris and he has the ID to prove it.

Unknown is being called a combination of Taken and the Bourne Identity as Harris he takes over another European city causing all sorts of trouble. The snow covered landscape of gray Berlin tagged with graffiti is nicely photographed as Martin roams the streets after being kicked out by the hotel security trying to piece together his hazy recollections. He searches for the cab driver/cafe waitress Gina (Diane Kurger) but she doesn't want to talk to him because she's illegally in the country from Bosnia. With no where left to go, he returns to the doctor who wants to run some tests when someone comes in and tries to kill him. On the run again he enlists the help of a cold war survivor, a retired Stasi officer Jurgen (Bruno Ganz) to help him discover his identity. Meanwhile Martin and Gina run around the city eluding a pair of mysterious assassins who for some reason always seem to know where they are in such a big city. The best scene in the film is when Frank Langella shows up as Martin's long time friend and you know by that oily smile means something is fishy.

Director Jaume Collet-Serra tries to set the film with a Hitchcockian mood. Adapted by Olivier Butcher and Stephen Cornwell from a novel by Gallic author Didier Van Cauwelaert the story has lots of loose ends and plot holes while it presents several red herrings and misdirections. Neeson looking older but still macho and formidable plays Martin with the right amount of pathos and perplexity. Even Aidan Quinn as the other Dr. Martin Harris is looking long in the tooth for this role. January Jones as Elizabeth the wife with a hidden agenda as well Diane Kurger as streetwise Gina serve as pretty blond wallpaper. Why do movie makers continue to cast young women and pair them with older actors then expect us to believe it? Despite what's innately wrong with the film, the action packed adventure is still a diverting way to spend a date night in February.
(Review by reesa)

Posted by Dallas Movie Screenings at 12:40 AM