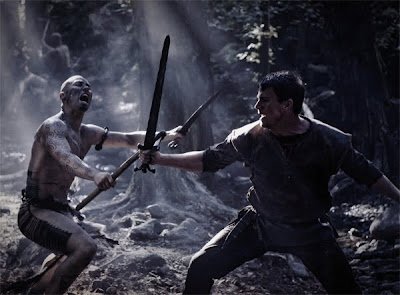 In 140 AD Roman centurion Marcus Aquila arrives at a military outpost in Britain. It's his first command which he requested. Twenty years ago his father and 5000 soldiers carrying the golden eagle of the Roman army had disappeared while invading the north. The Roman Emperor Hadrian was so angry he ordered a wall built to seal off what is now Scotland. It is Marcus' goal to recover the Legions golden Eagle standard to restore his family's tarnished reputation.

Marcus (Channing Tatum) predecessor had left the fort quickly when he found he was being replaced. Marcus has his new command fix the deteriorating walls and protective spikes. His first order is to send out a squad to check on a grain shipment that had not yet arrived despite the reluctance of a few officers. Later that night he senses trouble when the local band of rebels attack the fort. He leads his troops during a siege before suffering a serious wound while bravely rescuing the captured squad. He recuperates at the villa of his Uncle Aquila (Donald Sutherland). Rome commends him for saving the men and the fort but discharges him from the army due to his wounds. Demoralized Marcus impulsively saves the life of a Briton slave at a gladiator contest by getting the crowd to “thumbs up” the verdict. Aquila buys the young Briton to be Marcus' slave. Esca (Jamie Bell) hates all things Roman, but vows to serve him because he saved his life.

Marcus having heard that the Eagle has been seen beyond the Hadrian wall sets off on the quest with Esca as his guide through the highlands, mountains and savage wilderness. The people of the north are mistrustful of the Romans, and Marcus must rely on Esca to translate and navigate. They meet up with an ex-Roman soldier Guern (Mark Strong) who escaped the massacre of his father's army and now hides among the Britons. Viewing the battleground Marcus comes close the truth of what happened that fateful day that be linked with the identity of his slave. Esca's loyalty is tested when they are captured by the blue skinned Seal people of the northern coast.

Jeremy Brock's script was adapted from the 1954 adventure The Eagle of the Ninth by Rosemary Sutcliff. Director Kevin Macdonald who also did the Last King of Scotland aims the story on the friendship and antagonism of the two young men. They briefly touch on the whole slave vs master concept, conquerors and conquered, and father/son/friend redemption. Not exactly historically authentic because little is known about the northern wild tribes, the Seal people look more like native Americans with blue painted skin. There are some chase scenes that remind one of the Last of the Mochicans. The country side is beautifully filmed, the costumes and sets seem accurately appointed. It's disconcerting at first hearing Tatum speaking with an American accent with an almost too contemporary dialogue. But after awhile you forget about it, especially when the action picks up with some good battle scenes. Not a bad way to spend at an afternoon movie. Check the brain at the door, worth the popcorn.
(Review by reesa)

Email ThisBlogThis!Share to TwitterShare to FacebookShare to Pinterest
Labels: The Eagle review