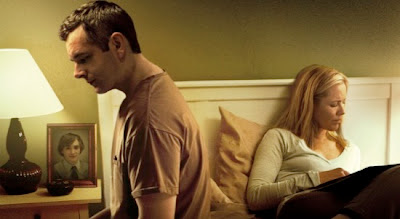 Like a snapshot of a typical American family living a nice home in the suburbs, Bill and Kate Carroll and their only son Sam could be anyone's neighbor or friend. As the camera looks closer, Bill and Kate are just polite to each other. Whatever feeling there may have been to each other at one time, they seem more like roommates just going day to day. One night Sam calls from his year at college. His dad is too tired to talk to him, and mom is tiptoeing around this feeling she is getting from Sam's voice. The next morning they wake to the news of a campus mass shooting and the knock on the door from the police that tells them Sam was the shooter and he had killed himself.

Maria Bello as Kate and Michael Sheen (with an American accent) as Bill weather the storm of this news with denial and fear. They can't leave their house with the armies of reporters camped outside. They hide upstairs, Kate sleeping in a fetal position on Sam's bed. Bill is crying in the shower. There's no way he can get to work. They have to unplug their phone and turn off the TV. Kate's brother and his wife (Alan Tudyk and Moon Bloodgood) take them to their house to escape the scrutiny. No one comes to Sam's funeral except for them. The TV is full of reports of Sam's video rant and commentators blaming the parents. Kate and Bill who were on the verge of separation before this incident are having a hard time dealing with this each wanting to blame someone or something. Bill's job tells him to take time off work while Kate is driving her sister-in-law crazy by acting like a supermom with her nephew. Bill and Kate finally take off together staying at a hotel while trying to reconnect and share their grief without the world watching.

Director Shawn Ku who also wrote the screenplay with Michael Armbruster keeps the film from being too overly melodramatic. The story focus is on the tortured couple who are revealed layer by layer as they come to terms in trying to understand what led their son to such an horrendous action. Both Bello and Sheen are emotionally raw and engrossing. Their pain, the blame, the people who now stare at them, the comments and judgments make it difficult for them to accept the responsibility. Kate says several times that God doesn't give you more than you can handle but you feel that maybe it's over her limit. In the real world these poor people would have benefited from some psychological counseling. But for some reason they keep trying to muck it up on their own. The performances are outstanding and worth viewing, but you may want a drink afterwards.
(Review by reesa)