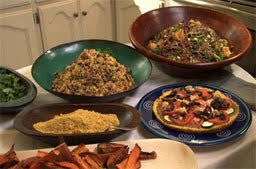 The old adage “you are what you eat” perfectly describes Lee Fulkerson's documentary on the importance of eating a plant based whole foods diet. The film examines the claim that degenerative diseases can be reversed by changing the way we eat. Heart problems, cancer, obesity and diabetes are becoming more common place in the states with an over indulgence fast foods and a large consumption of red meat. Even with the billions of money spent on research for medications to fight off these conditions, people lose sight that a simpler solution may be found in changing what we put in our bodies.

The idea of vegan foods usually fill people with tread and with images of rabbit food. The common belief is that you cannot get enough protein from just eating vegetables. The average American is 23 lbs overweight, 40% are obese and 50% are on medications. Fulkerson's film is filled with statistics and research extolling the benefits of removing foods that cause eating disorders caused by the motivation triad. Pleasure seeking whether it be food or sex makes individuals addicted to high calorie rich nutrient poor types of foods. The film features scientists Caldwell Esselstyn Jr. and T.Colin Campbell long time advocates of plant based diets who have been promoting this lifestyle way before it became trendy. Campbell became famous from his research in “The China Study” a 10 year exploration of Chinese dietary habits and it's correlation of certain types of cancer found in clusters of the population. Fulkerson also follows a few individuals who have been diagnosed with various aliments and over the course of the film who after following a changed meal plan are able to improve their health without the use of drugs.

Illustrated using cartoon graphics and vintage clips from dietary propaganda films, the information is imparted in a dry and straightforward manner. There's a few discussions of the types of food eaten in countries who favor large servings of vegetables and small portions of meat just for flavor. Then showing big grills of huge slabs of beef BB-Q's that is more prevalent in the US. Followed by enticing tables of vegan type fair being heartily consumed by young hip academic types. There's also some discussions on how milk is not truly the perfect food as advertised unless it's lowfat or fat free. As on scientist says “milk is the perfect food for calves”. This as well as the legendary basic food groups pyramid hints that there maybe some collusion between the government and the agribusiness in pushing dietary policy for their own purposes.

For vegans, vegetarians, lacto-ovo's, flexitarians, macrobiotics this film is speaking to the choir while otherswill be a bit enlightened by this film. As for carnivores whether this will influence a change in stopping at the Mickey D's on the way home from the movie is another matter completely.
(Review by reesa)

Email ThisBlogThis!Share to TwitterShare to FacebookShare to Pinterest
Labels: Forks Over Knives review