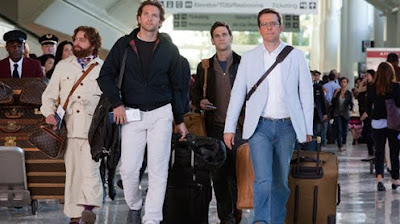 High anticipation, an endless sea of press seats and a lively crowd awaited the screening of Hangover 2 in Plano. Sadly, a large contingency of children under 12 were also present which made the cringe worthy vibe of the hard R film to come already a little bit squirmy. Somehow it is just hard to enjoy all that was offered in the sequal to the highest grossing R rated comedy of all time from 2009, The Hangover, knowing young an innocent minds were forever being warped in the same room thanks to irresponsible parents. Listening to the explicit sex-ploits of 5 high school aged girls in the row behind us who kicked our seats constantly didn't help to put me in the mood, either, but as the lights went down, I was prepared to view with an open mind.

The story starts with the revelation that Stu (Ed Helms), the dentist, is getting married in Thailand soon and all the Wolf pack are invited except for Alan (Zach Galifianakis). The thought of this party happening with out the comedic talents of Mr. G is already not making any sense. It is clear early on that the father of the bride Lauren (Jamie Chung), Mr. Fong  (Nirut Sirichanya) is no fan of his future son- in- law. The film initially starts at the  "we f-ed up for real this time" phone call, the film quickly goes back one week prior to find the guys planning for the trip and reluctantly decided to invite Alan along (like we knew they would). A peek inside Alan's home life (still at home with a wall covered in old Billy Joel posters, album covers and pictures from the Las Vegas fiasco) and bossing the parents around. He happily agrees but upon meeting the future brother in law at the airport (Teddy (Mason Lee) a cello playing pre-med student at Stanford at 16) jealously ensues and get the start of a conflict in the making and the eventual reason the ensuing melee occurs.

The Wolf pack fly to a Thai island paradise to prepare for the wedding.  After Stu gets badly roasted and burnt by dad's scathing toast, the boys decided on one beer on the beach with a bonfire and take Teddy with them for bonding purposes. Next thing we know, Stu and Alan wake up with Phil (Bradley Cooper) who knows where and who knows when and later discover that they had partied all night with Mr. Chow (again Ken Jeong)at Zach's invitation (they had kept in touch) in a filthy hotel in Bangkok. They don't know how they got there or what they did but they know something bad has for sure happened. Doug (Justin Bartha), the lost boy of the first film is safe on the phone back at the resort wondering where the heck everyone has gone.  The ruse is that they are on a pre wedding fishing trip as they all come to terms with the face that prized offspring, Teddy, is missing. except for his finger and Stanford ring which is on ice. And the puzzle piecing begins.

Pretty quickly you get the feel that this is the exact same film as The Hangover but with substitutions.  Vegas for Bangkok, missing Doug for missing Teddy, missing tooth for tribal facial tattoo, one jail for another, roof hideaway for (won't give that part away), piano for guitar, one wrecked car chase for another, one harried bride to be for another, tiger for chain-smoking monkey (who stole the show by the way), one embarrassing elevator episode for Zack for an embarrassing episode in a dance club for Stu with homage to The Crying Game. And of course, there is that all important wedding deadline looming. One hospital stay for another, Rufies for prescription drugs, speeding car home for speeding boat,  and a couple of questions that don't get answered until the expected and requisite picture slide show at the end.

Missing is the character development in the first film of memorable sidekicks. We don't really meet or care about anyone new in this film. In the first movie we wanted to join them for the ride....in the second we kind of want to get out of their way and maybe go back and do something on the island for a bit. It is much prettier there and the food is better.  Gangsters (Paul Giamatti), Russian thugs, drug-dealing monkey, stings, and dirty deals gone wrong ensue along the way. What cameras recorded in One are now on I-phone video and camera to give clues.  And yes we all know, if they don't find Teddy soon it means that "Bangkok has him".  Cue the song "One Night in Bangkok" from "Chess".

What made The Hangover so delicious was how everything unfolded, connected and surprised so unexpectedly. The dialog was more sharply timed and it was all something we hadn't seen or imagined before. This version is a shadowy remake, where I just kind of started feeling sorry for all the bumbling and after awhile, it all started to feel rather pathetic, considering we are dealing with four grown up men who should have learned from the last time.  The timing is off, there are uncomfortable breaks and there really is no freshness to Two. Sad to say that man-child Zach is kind of starting to grate like fingernails on a chalkboard.  This film is harder, darker and a little more brutal.  The winning formula was there in One, key words were erased and a new fill-in-the-blank was created. It seems the main focus of humor here are new and constant references, in a wide variety of ways, to male genitalia either real or simulated. The monkey is a charmer, worth the price of admission.  Again, images are not for the faint of eye or heart.  It still entertains, you will again be shocked, you will still laugh, you may even enjoy the ride but it takes you on a trip you have been on before and as in such cases, it is just never as fun as the first time.This time you may want a bath.  In the end, Stu is standing up for himself against a different form of oppression now that old GF Melissa is long gone.  Wait, we have seen that before too. Hope the children that were in the audience are all ok.
(Review by Cheryl Wurtz)