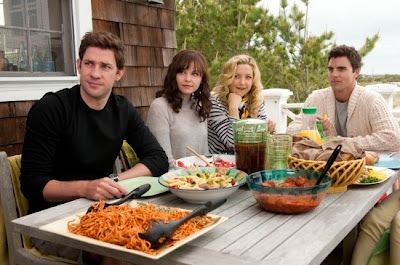 Rachel's 30th birthday party was supposed to be a surprise by her best friend Darcy. They have known each other since they were kids and are totally devoted to each other. Rachel knows her friend so well that the party wasn't really a surprise but she plays along anyway. Because Darcy the most flamboyant of the two always gets her way.

Rachel (Jennifer Goodwin) is a lawyer living in NYC. She's not particularly enjoying her job but she sticks with it because that's what expected of her. She normally calm collected which counters her best friends wild and crazy life of the party personality. The movie doesn't really explain what Darcy (Kate Hudson) does for a living. We only know that she got into Notre Dame while Rachel went to NYU Law School. Rachel met Dex (Colin Egglesfield) at school and they got on famously until she introduces him to Darcy. Now Darcy and Dex are set to be married in a few months. The night of the birthday party a slightly drunk Rachel admits to Dex that she was always attracted to him and the next thing you know wake up next to each other while Darcy is calling both of them worried that Dex didn't come home.

Adapted from Emily Giffin's chick-lit book by screenwriter Jennie Snyder and directed by Luke Greenfield, Something Borrowed is supposed to be light fluffy romantic fare with their charismatic starpower. Jennifer Goodwin with her cupie doll cuteness does a good job as the best friend who always stands back and lets Darcy get all the attention. Kate Hudson has played the loud obnoxious party girl so often that one may believe she is actually like that in person. The third partner from their childhood is John Kraninski as Ethan who offers moral support to Rachel while she is guilt tripping over her one night stand with Dex the fiancé. Both Rachel and Dex are doormats to Darcy and Dex's father. It kills Rachel to see Darcy and Dex together, and clueless Darcy is trying to set Rachel up with lounge lizard Marcus (Steve Howey). And Claire (Ashley Williams) is throwing herself at Ethan.

As attractive as this cast may seem, they all look a bit older than 30. They are financially secure, have good jobs, nice cars, spend weekends at the Hampton's. Ethan's character is the only one that rings true. He's the only one who seems to say what that audience may want to yell back to the screen. The scene of Darcy and Rachel dancing to Salt-N-Pepa's Push It is probably the best part of the movie because you can see they are really enjoying each other. Hudson's Darcy is so over the top, it's hard to image anyone wanting to spend any time with her or that she and Dex have much to say to each other. Both Dex and Rachel are both doormats to “A” personality Darcy. File this movie under cute and annoying.
(Review by reesa)

Email ThisBlogThis!Share to TwitterShare to FacebookShare to Pinterest
Labels: Something Borrowed review