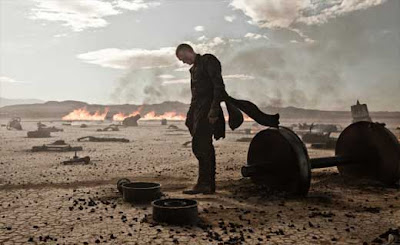 Humans and vampires have been sharing the planet for years. While vampires are stronger, humans have daylight. Eventually the two races have destroyed the world. Mankind moved behind the city walls run by the churches. The ultimate weapon to fight the vampires was formed with priests who helped turned the tide of the war. Priests are super warriors that are trained from birth. The remaining vampires were captured and put into crypts in underground mines. The priests were disbanded and forgotten living in obscurity like the vampire menace before them.

In the wasteland, a family having dinner is disturbed by a rumbling and noise. They send their daughter to the basement instructing her to keep silent. But since her family is being slaughtered upstairs she screams. In the city the populace is mulled by a voice over loudspeakers telling them that “absolution is the answer” and “to go against the church is to go against god”. Hicks (Cam Gigandet) the sheriff of the wasteland town, informs a Priest (Paul Bettany) that his brother's daughter Lucy (Lily Collins) has been kidnapped. Hicks is in love with Lucy. So he joins the quest. The carnage at the house shows the culprit was vampires. The priest goes against his church's orders to discover who took her and for what purpose. The church fathers had sent 4 priests out to find him and bring him back. But 3 meet up with a guy dressed in apocalyptic the Good, the Bad and the Ugly black hat (Karl Urban) who finishes them off in nothing flat. The third a priestess (Nikita's Maggie Q) has a history with the Priest and a reason to find the girl.

Based on the Korean comics Priest by Min-Woo Hyung, Priest is directed by Scott Steward and written by Cory Goodman. The project started in 2005, eventually being filmed and completed in 2009. At that time it was the most expensive production from Screen Gems with a budget of $60 million. The film diverges a bit from the original comics with the whole culture of the vampires are ignored in favor of the Jedi Knight like Priests and the massive special effects set pieces. Bettany who worked with Scott Stewart on Legion has some amazing slo-mo scenes battling creepy vampire creatures that have no eyes and a huge teeth to bite you with my dear. Maggie Q also kicks some major vampire butt while looking very stylish with the priest tattoo of her order: a cross on her forehead and between her eyes. There's not a lot of storyline. Just vampires repopulating wanting to take over the world again, and the Priest doing John Wayne in the Searchers with his side kick Hicks while things blowup. Cool and forgettable.
(Review by reesa)