Alvin and the Chipmunks: Chipwrecked 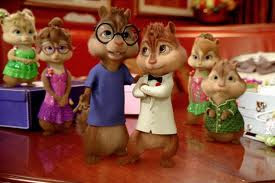 Yes, those high pitched voiced rodents are back with another movie chronicling the bad behavior of Alvin and his friends. Ever since the animated musical group was formed for a novelty record in 1958 Alvin, Simon and Theodore has been a perennial favorite for kids everywhere. In fact there may be some correlation with today's squeaky voiced pop singers and the popularity of Alvin and the Chipmunks.

The first two movies featured live-action and CGI creature adventures with Jason Lee as Dave the chipmunk human father figure who discovered them and is also their musical manager. Justin Long, Matthew Gray Gubler and Jesse McCartney voice Alvin, Simon and Theodore. The “family” with the musical group their female counterparts the “Chippettes” (Christina Applegate, Anna Faris and Amy Phoehler) are going on a cruise (big commercial plug for Carnival Cruise Lines). They are on their way to perform at the International Music Awards. Because in the last couple films featured their musical talents the tiny pop stars constantly burst out in song and dance while causing havoc on the ship. Which is much to the consternation of Dave who admonishes the group especially Alvin who can't seem to help himself in his pursuit to have fun. The last straw is when jumping a ride on a kite that gets away from a strong gust of wind the 'munks' are flown away from the ship landing on a deserted island. It is there they ponder their behavior and hope that Dave will come rescue them. Dave had already tried and gets stranded on the island with Ian (David Cross) their old manager dressed in the ships pelican mascot costume. He had lost his job in the record industry due to Dave and the Chipmunks and harbors a grudge. The island has another castaway who has been on the island for the past 10 years with various sports balls as companions. Add more songs and survival in jungle games, Simon bitten by a spider and getting another personality with a French accent as Simone (Alan Tudyk), Alvin learning to become responsible, and Dave learns to relax his parenting skills and trust his kids.

Directed by Mike Mitchell of Shrek Forever After That and written by Jonathan Aibel and Glenn Berger this outing is basically aimed at the younger demographic. There is not only the ubiquitous pop tunes, there's the moral lessons of being responsible for one's behavior and listening to your parents. At least the technology of the computer generated squirrel things are visually convincing with their real actors co-stars. Parents take your little ones who will reward you with their smiles because after all it's all about them.
(Review by reesa)

Posted by Dallas Movie Screenings at 12:30 AM

Email ThisBlogThis!Share to TwitterShare to FacebookShare to Pinterest
Labels: Alvin and the Chipmunks: Chipwrecked review