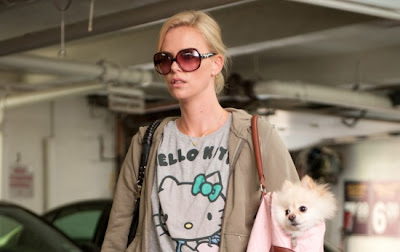 Diablo Cody who won an Academy Award for writing Juno is back this time aiming that talent for strong witty dialogue at a ghost writer of young adult fiction who has never grown emotionally since her high school years at the top of the food chain. Charlize Theron is never afraid to show the ugly side of her beautiful face is Mavis Gary who returns home to the fictional Mercury, MN in hopes of picking up where she left off with her old boyfriend.

When she left Mercury, Mavis had wanted to become a writer in her own right. Instead she became a ghost writer unable to take the credit for a successful young adult book series that is on it's ebb. Under the gun to submit the last manuscript, she gets an bulk email announcement of the birth of first child for her ex-boyfriend Buddy Slade (Patrick Wilson). Soon she is packing up her white Pomeranian into her Mini Cooper to drive from the big city of Minneapolis to her hometown of Mercury while playing “their song” over and over. While Mavis is attractive outside, her inner life is a mess. She's personally slovenly and is a sociopath. She sincerely and mistakenly believes that Buddy really wants to be with her and not married with a brat. Mavis calls some old friends, but no one has time for her. So dressed to kill she heads out to the local bar where she runs into Matt Freehauf (Patton Oswalt) who had the locker next to hers. He was invisible at high school except when a rumor came around that he was gay. He suffered a horrific beating that left him with a crippled leg. Matt takes Mavis to another local hangout where she runs into Buddy who asks her for an autograph for a niece and to come hear his wife's (Twilight's Elizabeth Reaser) band of housewives where she is the drummer. In Mavis's mind these courteous niceties are considered an overture from Buddy to get back together. The more she misunderstands, the more combative she gets and the more she drinks. It all culminates at the baby naming party where she throws a huge scene.

Mavis is an unrepentant and throughly unlikeable character. There's no per resolution, nothing is tied in bows and sent home happy. Outside of Patton Oswalt's Matt who steals every scene that he's in it's hard to feel sympathy for anyone. Matt is about as broken as Mavis and it makes him relate to her and she to him although she abuses his attraction to her. It's like Mavis is Alvin (of the Chipmunks) on drugs crashing a party of Stepford residents. Mavis makes one feel awkward, uncomfortable and pitiful. But one doesn't feel sorry for her as much as just exasperated.

Director Jason Reitman unites with Diablo Cody once again hoping for the same magic as Juno. Where that movie was light hearted punctuated with insightful observations, Young Adult retains that sharp wit, but this time it's mean and depressing. Cody does offer insight on how Mavis eavesdrops on conversations of teenagers to fill her stories. Maybe keeping her mind geared to voice the novels on teenagers kept her from aging like her peers. But frankly such an abrasive heroine doesn't really deserve a second thought.
(Review by reesa)