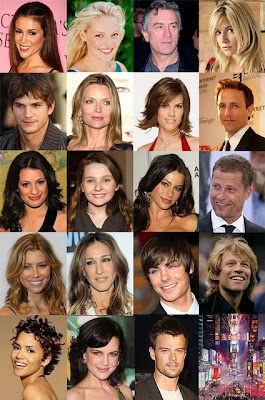 Director's Garry Marshall's previous rom-com Valentine's Day offered the same intertwining vignettes of random people who are chasing the romance of a specific holiday. Depending on the success of his latest film New Year's Eve which follows the same formula, we may expect to look forward to Halloween, 4th of July, or Thanksgiving.

New York City on New Years Eve culminates with the yearly celebration of the dropping of the lighted ball in Times Square which is broadcast with testy diva Ryan Seacrest who freaks when there's a electronic glitch. Claire (Hilary Swank) is in charge of the event assisted by her steadfast buddy cop Brenden (Ludacris). When the ball gets stuck the notorious Kominsky (Hector Elizondo) comes to the rescue. Jensen (Jon Bon Jovi) is the headliner at the Times Square extravaganza as well as the big party at the record studio owned by Sam (Josh Duhamel). He gets stuck in Connecticut for a wedding and has to get a ride in a motor van with the town preacher back to the city while he tries to write his speech for the studio party. He tells the quirky pastor's family of his romantic encounter the last year where they promised to meet each other again. (This is where you have to guess which of the women you have seen so far is the one). Single mom Kim (Sarah Jessica Parker) who does costumes for the Rockettes doesn't want to let teen daughter Hailey (Abigail Breslin) hang with her friends at Times Square so she chases after her. Jensen is trying to get back with ex-fiancé chef Laura (Katherine Heigl) who is catering the studio party. The stories of various individuals also include a flirty bicycle courier Paul (Zac Efron) and his buddy cartoonist Randy (Ashton Kutchner). Elise (Lea Michele) Jensen's back up singer is stuck in the elevator with Randy the slacker (you know this because he's wearing pajama bottoms and a hoodie). Cute meets cute, you know what happens. His friend Paul gets paid to take tired and fed-up Ingrid (Michelle Pfeiffer without makeup and still looks good) who just quit her sorry job at the record studio to accomplish a series of bucket list resolutions. Robert DiNiro as Stan Harris who is dying of cancer in a hospital has Hallie Berry as his nurse and only wants to go watch the ball drop before he drops. Then there's the completely independent of any of the other stories about the battle for the cash award given to the first baby born with couples Seth Meyers/Jessica Biel against Sarah Paulson/Til Schweiger. Meanwhile most of this eventually resolve themselves in a nice neat package so everyone can go home happy, sated, until the next holiday.

If you were tired of reading this, it's even more exhausting watching it. The scenes flit back and forth between stories so haphazardly it makes your head spin. Counting the famous faces will be extremely distracting at some points. Valentine's Day screenwriter Katherine Fugate manages to stuff all these stories, faces and situations without much development leaving the characters to fill in the blanks with awkward exposition. You can see the Oscar winner/nominees/A-listers try to infuse their scenes with some sort of relevance but it makes one wonder what they were thinking. The best parts of the movie are the outtakes during the ending credits. At least you can see the actors making fun like when Carla Gugino who plays the OB/GYN who delivers Biels baby which turns out to be a DVD of Valentine's Day. If you just want mindless dreck, then go see it. Otherwise please don't encourage them to make more of these movies.
(Review by reesa)