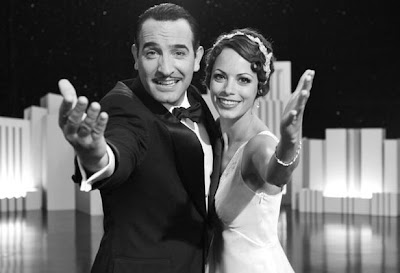 1927 Hollywood-land: George Valentin (Jean Dujardin) is the leading silent film star. He, his little dog (Uggie) and their adorable antics, is the talk of the town. In an era where the film industry doesn’t have the technology to have movies with audible dialog: Valentin’s expressive mugging for the camera, as well as his handsome face, helps him bring in the big money. At the beginning of the movie we find him truly living the lavish lifestyle of the Hollywood upper echelon. Even a simple kiss on Valentin’s famous cheek can propel a person onto the path of stardom; as is the case when Peppy Miller (Bérénice Bejo) accidentally drops her purse, bumps into the Hollywood hero, and gets rewarded with a new career path.

However, this is not the story of Valentin’s success; it’s the story of the perils of pride, and the plight of the artist. Towards the end of the decade, the technology for audio movies comes singing into the mainstream. A proud Valentin dismisses this notion, thinking that his faithful fans really only want to see him. He leaves his producer Al Zimmer (John Goodman) to shoot his own silent films, thus leaving the doorway open for his fate stricken protégé, Peppy, to become the next big thing in Hollywood.

And so we have parallel stories: the fall of the old famous, and the rise of the new young faces in pop media. It’s a trend that continues to a varying extent to this day. But it goes deeper than that; telling tale of dedication of a person to their craft, the uncompromising nature of pride, and the effects that this mode of thinking can have on their life. All in all, it’s a fairly common idea. However, what makes The Artist so very special is its gimmick; not only is it a film about silent films, but it also is a silent film.

One might think that in this wonderful age of 21st technology, a silent film would be especially difficult to create; perhaps even lost on an audience that has been spoon feed the lavish indulgence of Dolby Digital sound. But The Artist showcases a special, touching brilliance that is divorced from much of the media of today. The directing style is straight out of the era movies; perhaps even being lent the special quality that made those films work in the first place. The pacing and acting compliment the throwback mixture quite well, blending so seamlessly, that the only visual queue to creation date of The Artist, is the crystal clear production quality that was absent from the films of yore.

For about 99 minutes the audience is transported back in time, and treated to silence. With only jazz, big-band, and orchestra to inform the actor’s expressions, moviegoers are privileged to see a long forgotten way of experiencing media. However, the audience was probably not the only part of the movie that got to do something exciting and new. The movie cast was likely lead to experience a new-old way of expression; having to act and convey the full range of emotional context with zero audio cues. The production crew was likely exposed to a method of filmmaking that hasn’t been done since film cameras were cranked by hand; having to capture this kind of acting in the same manner as their progenitors.

There is a special kind of magic at work in this movie. It’s a feeling that words cannot describe, so The Artist doesn’t bother trying.
(Review by Quinn Cruz-Hawkins)

Email ThisBlogThis!Share to TwitterShare to FacebookShare to Pinterest
Labels: The Artist review