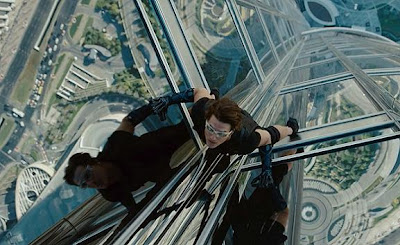 After 15 years, the 4th installment of the cinematic adventures of the Ethan Hunt and his ever changing team of agents as they once more save the world from destruction. Pixar writer and director Brad Bird who has done The Incredibles and Ratatouille tries his hand with live actors adding some actual character development somewhat lost in the previous outings. The screenplay by André Nemec and Josh Appelbaum who wrote Alias fills it with similar absurd plots and action. Tom Cruise reportedly demanded to do all his action sequences which this movie is packed from the beginning to the end.

Ethan is broken out of a Russian prison by Benji (Simon Pegg) who is back after passing his field agent tests and Agent Jane Carter. Ethan (a very fit and aging Tom Cruise) is back getting missions this time from a telephone both like Get Smart. They have to find Russian launch codes that were stolen from a murdered agent (Josh Holloway of Lost) and Jane's partner. The bad guy Kurt Hendricks (Michael Nyqvist) also know as Cobalt a Swedish born Russian nuclear strategist who believes that apocalyptic events are a natural stage of evolution. That includes nuclear holocausts. Along the way the team is blamed for blowing up the Kremlin when they try to find the secret archives that identify Cobalt. This causes the IMF Secretary to disavow the team but charges Ethan to get those codes however he can. Unfortunately their car is attacked and Ethan is left with the IMF analyst William Brandt who might be more than what he seems to be. The team all agree to continue despite the “ghost protocol” levied on their agent status. It takes them to Dubai and Mumbai while being chased by the Russian police while they chase Cobalt, his right hand man Wistrom (Samuli Edelmann), an assassin courier Sabine Moreau (Lea Seydoux), and a Indian billionaire (Anil Kapoor of Slumdog Millionaire).

The action sequences are breathtaking edge of your seating exciting. Like the rope scene in the computer room in the first MI film the climbing outside of Dubai tallest building using specially designed gloves will be the most talked about thrill moment. Then there's Ethan's rappel down and back into the window 100 stories up. There's the break out of prison, the sandstorm chase on foot, and the fight in the space age parking garage. Not to mention the special metal suit that Brandt is force to wear that Benji swears will catch him with special magnet before he hits a giant metal fan. There's more humor in this mostly from Simon Pegg's nervous nerdy computer geek. One of the great joys of MI movies is the masked disguises but the machine breaks and the agents are forced to use their own devices to foil the bad guys. Or many Cruise wants to let everyone know that it's him doing the scene and not a stunt man. In any event this is the holiday movie of month. The perfect film to take the visiting relatives when you get tired of watching football games. Make sure you enjoy it in Imax.
(Review by reesa)