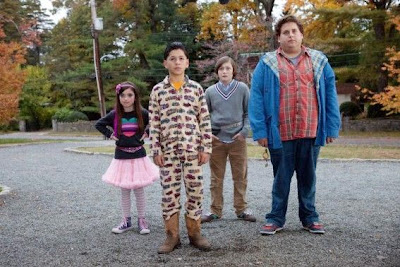 The old Jonah Hill has over done the chubby loser character for several films now. The wisecracking sidekick that mumbles his way through his roles with the same beat and mannerisms. The Sitter is hopefully the last we will see of that version of Hill as he is currently sporting less poundage that will hopefully allow him to broaden his career with roles that have more confidence as he proved in Money Ball.

Hill plays Noah a suspended college student living at home with his divorced mom. He gives sexual favors to Marisa (Ari Graynor) who refuses to reciprocate in kind. He so lacks in self-esteem that he doesn't make an issue of it and rides home on his bicycle because he lost is license to a DUI. His mom wants him to get a job. Even as a replacement baby sitter for a friend who is setting her up with doctor. Noah doesn't even like kids, but takes the job because despite his faults he sincerely wants his mom to go out and have a good time. His dad left them years ago and never gave them support. The kids are Slater (Max Records) who at 13 seems to suffer from severe anxiety. Little Blithe (Landry Bender) over indulges in make up and wants to be a celebrity. And there's Rodrigo (Kevin Hernandez) a adopted El Salvador kid who likes to blow stuff up and run away so often the family had a locater sewn into his coat to track him. A Lojack for kids. Noah gets a call from Marisa who entices him to drive to Manhattan and bring some cocaine from her dealer by promising him sex and calling him her boyfriend. In an obviously irresponsible move Noah piles the kids into the family minivan meets up with Karl with a “K” (Sam Rockwell) who keeps his drugs in dinosaur eggs and lives in a gym filled with body builders. Rodrigo who has already blown up a restaurant bathroom steels one of the eggs from Karl and the rest of the movie follows the consequences.

The premise from 1987's Adventures in Babysitting is the basis of The Sitter which is filled with sexual innuendo, jokes around bodily fluid emission and farts. The kind of humor that was funny back when you were 10. Unfortunately this is not the kind of movie that you should be bringing your child to watch. Sex, drugs and child endangerment is not particularly funny stuff. The writers Brian Gatewood and Alessandro Tanaka try and make Noah resolve the childrens problems by offering sage advise that for some reason makes sense to the kids, but he's also a big muddling mass of neurosis himself. Richardson, TX high school graduate David Gordon Green who also directed Your Highness and Pineapple Express tries to make this movie about overcoming your hangups and shortcomings, but it comes out to be one loathsome mess. Hopefully Jonah Hill with his new body will no longer be the go to guy for these inane comedies although he's one of the film's producers. Shame on him.
(Review by reesa)

Email ThisBlogThis!Share to TwitterShare to FacebookShare to Pinterest
Labels: The Sitter review