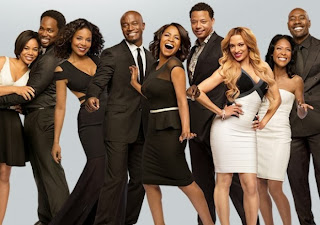 In the 1999 rom com The Best Man, we meet a group of college friends who are gathered for a wedding. Writer/director Malcolm D. Lee (Spike Lee's cousin) is back revisiting these same characters 15 years later in their lives still living from the repercussions of those events. Outside of some obvious Christmas season propaganda and heavy handed God speeches, with attractive, fashionable urbane African-American characters, the movie still holds some of the chemistry that made the first movie so successful. Even if you haven't seen the first one and are not part of it's target audience, it's still and enjoyable holiday excursion to the theater.

Harper Stewart (Taye Diggs) enjoyed the fame of being a best selling author, but five years later his newest project is rejected by his publisher. They suggest that he do a biography of his friend Lance Sullivan, a legendary professional football player, who was his best friend before Harper had an affair with Lance's wife, Mia (Monica Calhoun) in the last movie. Harper's wife Robyn (Sanaa Lathan), a chef, is now expecting a baby after many tries and fertility treatments. He's stressed from not only about the impending birth, but with money problems and being laid off from NYU. He decides they are going to accept Lance and Mia's holiday weekend invite to their upstate estate for the holidays while he surreptitiously gathers information on Lance for the book. Also arriving is Jordan (Mia Long) who once had a thing for Harper is now a successful TV/movie producer and still makes Robyn jealous. And Jordan's current boyfriend Brian (Eddi Cibrian) who good naturedly becomes fodder for white jokes by everyone else. Julian (Harold Perrineau) had married his stripper girlfriend Candace (Regina Hall) and they have left their wild lives behind and now run a charter school together. Their funding drive for the school hits a snag when Julian discovers a YouTube of Candace back in the day looking like she's accepting money for sex at a frat party. To add trouble to the mix of guests is Shelby (Melissa De Sousa) who is now a Housewife reality star and playboy Quentin (Terrence Howard). Plus everyone's well behaved children gathered to enjoy the holidays.

There's a lots of laughs and tears as everyone works out their problems and relationships during the stormy emotional weekend. There's plenty of eavesdropping at just that moment that causes misunderstandings to escalate. The women catty with each other, then bonding with each other. The men having heart to heart and ego battles. The situations are all over the top often times bogged down with sentimentality, but what keeps the movie together is the actors who fill their roles with love and respect. Hopefully we won't have to wait too long for a revisit as teased at the end of this one.
(Review by reesa)