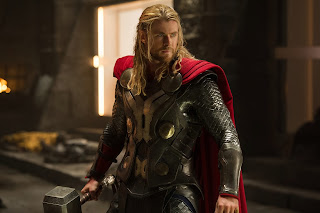 Chris Hemsworth works well as the perfectly formed he-man hero, even though according to the Marvel cannon he's supposed to be three times his human size. Still his sculpted form as evident in the first scene we see him will make some people sigh. Directed by Alan Taylor and written by Christopher Yost, Christopher Markus and Stephen McFeely explore the events on Asgard right after Loki is sent back in chains after trying to rule earth in the last Avengers movie. Granted the beginning set up is somewhat confusing explaining the Dark Elves and the Aether that they need to turn the universe into its state before creation. Really, what's the point in that?

Malekith (Christopher Eccleston) is the ruler of the Dark Elves of Svartalfheim. He lost the battle over the possession of the Aether by Thor's grandfather who told everyone that the Elves and the Aether were destroyed. Instead the Aether was entombed in a stone column in a cave and the escaped Elves are on a ship in suspended animation. Meanwhile Loki (Tom Hiddleston) has returned to face his father and sentenced to prison on Asgard. Thor who has been settling the wars on the Nine Realms has come back home, but he clearly misses his girlfriend astrophysicist Jane Foster (Natalie Portman) on earth. Odin (Anthony Hopkins) tells him to find someone in his own world and get ready to become the king.

Every 5000 years the Nine Realms come into celestial alignment in the Convergence where portals are created connecting the universes. Jane and her team Darcy (Kate Dennings) and Darcy's intern Ian (Jonathan Howard) have been investigating these anomalies where objects are dropped and disappear only to fall back down again from nowhere. However some don't get back. Jane becomes one of those objects that disappear. She ends up in the cave of the Aether which enters her body. Thor becomes worried when Heimdall (Idris Elba) the Asgardian sentry of the bifröst bridge loses sight of Jane and he returns to earth just in time when Jane “falls” back to earth. Meanwhile Dr. Erik Selvig (Stellan Skarsgård) have been running around Stonehenge naked (because he thinks better without his pants on) as he's also discovered the strange cosmic readings. The Dark Elves wake up as the Convergence approaches the and Aether is now residing in Jane. Thor takes Jane back to Asgard to help her and there the war begins.

There's a lot of stuff going on in this movie. There's Loki dealing with still getting revenge on not being King and his other family issues. The subplot of the two brothers is the heart of the movie with Thor needing Loki's help and having trust problems. Rene Russo as Frigga the Queen and mother gets more screen time and some kick butt scenes. Anthony Hopkins as Odin has more moments as the father who can't understand his sons. Thor is straight guy to the funny characters like Dr. Selvig and Darcy, even Jane. Of course Tom Hiddleston as Loki steals the film as usual. Don't forget to stay for that extra scene after the credits for the next adventure and the now traditional Stan Lee cameo. It's the big fall movie that's worth the popcorn despite it's muddled plot.
(Review by reesa)