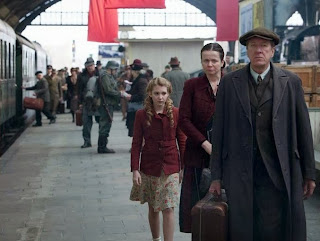 This is a solid movie with a perfect ending in my opinion. The Book Thief takes WWII and the holocaust and serves as the backdrop to the humble story of a girl at its core. With beautiful imagery, great acting and fantastic set pieces and wardrobe, The Book Thief is one to remember. It reminded me of a movie from the 90's where it is a story with heart a perfect ending to where it wraps everything up but asks us questions as human beings and what we are capable. I never read the book but I can tell you its a really solid movie and I quite enjoyed it a lot and I think it will get a nomination from the Oscars for Best Supporting Actor because let me tell you Geoffrey Rush stole the show as the character with a lot of heart and did what was right. If it is playing in your area I highly suggest it. 9/10

Q&A: The director was really passionate about the book and wanted to stay true as possible to the book. The author really liked the outcome of the movie and it seemed like Geoffrey Rush had a good time, especially trying to do a German accent. The movie took three months to shoot and actually shot on streets of Germany to give it that authentic feel and of course it got really cold. Sophie Nelisse claims this is her big role and she was great in it and she also tried to learn a German accent.
(Review by Chase Lee) 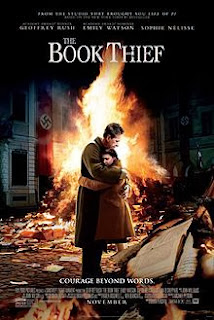 Another movie about the horrors of World War II doesn't seem to be high on the list of holiday viewing. But director Brian Percival with a script by Michael Petroni adapted from a novel by Markus Zusak manages to offer a story with a different viewpoint and perhaps a more hopeful and heartfelt vision. The book first published in 2005 has numerous awards and was list on the the New York Times Best Seller list for over 230 weeks. While the movie retains some parts of the book a portion of it has been changed or left out so it should be rightfully called “based on a novel by”.

Narrated by the voice of “death” (Roger Allam) who introduces the characters and his subsequent seduction of their lives, he opens with taking Liesel's younger brother. They are being taken on a train by their mother who is surrendering them for adoption. At the quick burial near the train tracks Liesel (Sophie Nélisse) steals a book dropped by one of the grave digger. She arrives at the home of her new foster parents housepainter Hans Hubermann (Geoffrey Rush) and his thunderstorm of a wife Rosa (Emily Watson). She is naturally nervous, missing her beloved brother and wondering if her mother is going to come back. Hans discovers her book, The Grave Digger's Handbook and teaches her to read. He create a wall in the basement for her to explore new words. Opening the world of book and words is a big revelation for the young girl.

Liesel makes friends with her neighbor Rudy (Nico Liersch) who is smitten with the new kid on the block. He walks her to school and challenges her to races always with the goal to get her to kiss him. Going to school during the early days of Nazi Germany is full of brain washing the students on towing the political party line. The students have to sing about Hitler and celebrate his birthday by a book burning bonfire. Liesel manages to steal her second book from the fire. When she discovers the library at Frau Becker's home she is allowed to read while there. When she is kicked out by Frau's husband, she decides to break in the window and “borrow” the books with Rudy's help.

Hans life was saved during WWI and he repays the act by taking in Max (Ben Schnetzer) his savior's son. Since he is a Jew, the hide him in their home, then eventually in the basement as times become more restrictive and the Nazi's begin to do house searches. Max and Liesel develop a friendship over books and Max encourages her to use words to describe the world outside that he is not allowed to experience while war rages.

Lovingly told, the war told from the perspective of normal working people of Germany is sometimes too long, and meandering. The anxiety of living with Nazi thugs keeps the populace cowed and pliant. Drawing attention to yourself only brings suspicion. Especially tense when you are hiding a Jew in your home. Watson in particular embodies the sometimes harsh and angry mother who just has a hard time convening her true emotions. Rush as her ever patient husband played with his usual quirky self creates a whimsical out of work man who helps Liesel settle in her new life. Nélisse holds her own against the two veteran actors and we will probably see a lot more of her in the future. If they only gotten rid of the “death” narrative, they movie would not feel so discordant.
(Review by reesa)