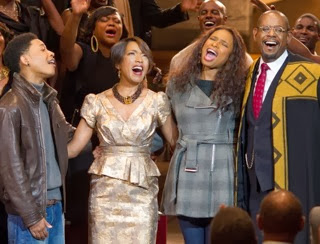 If you are unfamiliar with this movie, please note that this is a musical based on the Langston Hughes' play of the same name. Directed and written by Kasi Lemmons (Eve's Bayou), it joins the other holiday movie offerings (The Best Man Holiday and Madea's Christmas) aimed at black audiences. The movie opens by the main character singing while walking around his neighborhood from songs produced by Raphael Saadiq who composed the score with Laura Karpman. Who knew that Forrest Whitaker and Angelia Bassett could sing so well? Jennifer Hudson who belts out songs like she's going to bust a gut over powers the rest of the cast. There should be a movie with just her singing and nothing else.

Baltimore teenager Langston (Jacob Latimore, R&B/hip-hop artist) who was named after the famous poet Langston Hughes because mothers name their children filled with hope for their future. Mom Naima (Hudson) informs her son that he is spending the holidays at his grandparents house in Harlem. He's never met them, and his mom never talked about them as they have been estranged since he was a baby. They are getting evicted and she's got to work and pack promising him to meet him later. Obviously angry in that teen angst way, he lands in jail upon arrival in NYC when someone steals his bag. He gets on the wrong foot with Cornell (Whitaker), a Baptist minister and his wife, Aretha (Bassett). Grandma wants to smother him with love, but is sensing his awkwardness, bats away his tough questions as to why his mom left home, and who is his father? Cornell tries to instill in Langston a sense of purpose and identity. Shows him a watch given to him by Martin Luther King which Langston tries to pawn to get money to save his house.

Between the musical numbers of bruised hopes and dreams, the story is filled with visions of old time religions, black history and a contemporary version of Mary and Joseph (Grace Gibson and Luke James) as Langston dreams while attending his grandfather's Black Nativity Christmas Eve event at the church. Mary J. Blige's turns up as an angel with her white hair and big voice. Tyrese Gibson is the guy Langston met in jail and tries to buy a gun from him, the purpose of which is unknown since the kid is obviously making a lot of bad decisions as the adults around him won't come clean. Naima sensing her son is in trouble comes to Harlem and the big confrontation is the whole reason for the movie which is filled with tears, salvation and the song to sing on the way out of the theater.
(Review by reesa)