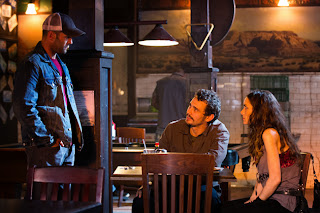 Sylvester Stallone is a prolific writer of action movies mostly staring himself, but as he's gotten to be older and not quite fitting the physicality of the hero role, Jason Statham has become the stand-in. Based on the novel by Chuck Logan it's directed by Gary Fleder, it's a holiday weekend crowd pleaser for mindless entertainment.

Statham plays Phil Broker an ex-DEA agent who quit when his last undercover job went south and his cover was blown. He moves to a small Louisiana town full of swamps and Cajun music. Phil's British accent is never really explained. Broker now works doing carpenter work while being a single dad to his ten year old precocious daughter Maddy (Izabela Vidovic). It would have been fine and comfy living, but Maddy bloodies the nose of the class bully. His meth addict mom, Cassie Bodine (speed freak skinny Kate Bosworth) who swears up and down a blue moon seeking revenge. She asks her brother Gator (James Franco) to teach that upstart new guy a lesson. Gator happens to be the town kingpin running a meth lab in his boat garage. His henchmen encounter Broker unsuccessfully, much to Gator's annoyance. The last thing he wants is making too big a scene because of his illegal operations, yet he can't ignore the threat Broker poses especially when he discovers the man is an ex cop. Things get complicated when Gator, while trying to keep his hands clean gets his drug courier girlfriend Sheryl (Winona Ryder) to contact Broker's last bust who sits in prison. Danny T (Chuck Zito) sends his crew lead by mean and nasty Frank Grillo to deal with Broker. And y'all know how that's going to turn out.

Having Jason Statham in a movie mean major kick-butt and once again he delivers well. He breaks arms, legs, smashes bodies into car windows, and smacks them with a gas hose nozzle. There's even a bit of dramatic emoting going on with his dad and daughter moments. He even gets to save a kitty! Franco eats up the screen as the crazy sadistic Gator who has the local sheriff (Clancy Brown) looking the other way. Rachelle Lefevre plays the school counselor who doesn't quite get to be Broker's girlfriend because that story wasn't interesting enough to include in the movie. And someone please give Kate Bosworth a sandwich! That girl is skin and bones which works well with her potty mouth white trash role.

Yes, this will do well after your stomach is full of Thanksgiving fare, the football game is over, and the family still wants to do something. But keep the little ones at home, please.
(Review by reesa)