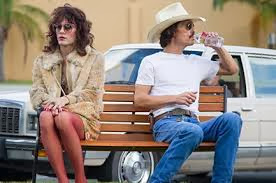 Back in 1986 the AIDS epidemic was rearing it's ugly head, many excellent films have been made about the dedicated doctors and scientists racing for the cure and the individual plights in deeply emotional and tragic stories. The true struggle by the victims of the disease has been well told in last years' excellent documentary How to Survive a Plague. Making a film about HIV seems to have run it's course as of late and no longer a hot button issue. Now comes a new film by director Jean-Marc Vallée and writers Craig Borten and Melisa Wallack's “inspired by” tale of true life Ron Woodroof who was the subject of a 1992 article in the Dallas Morning News by journalist Bill Minutaglio. Woodroof had gotten the idea for the Dallas Buyers Club from similar clubs operated in other major cites to provide life saving medicinal cocktails that were not approved by the FDA.

The movie opens with Woodruff (Matthew McConaughey) having hot, skanky sex with two women in the bull pen of a rodeo while he's watching the cowboys getting injured. Matthew lost 40 lbs for this role and is almost unrecognizable to the point where it's a little distracting. He's a good old boy Texan, hyper, foulmouthed and a hustler hanging with his buddies betting money for drinks, women and drugs. He's been feeling not so well of late and an accidental electrical shock at work sends him to the hospital where the doctor informs him he's got the HIV virus and probably only has a month to live. Woodruff swears a blue streak in response and refuses to believe the diagnosis. He decides to spend the next 30 days indulging in all his major vices until he finally wises up and decides to fight. Knowledge is power and his research uncovers that even though he's not a homosexual or intravenous drug user, he does fall in the category of having unprotected sex with women who were users. He figures a way of getting a hold of the AZT currently in a study trial at the hospital which he almost kills himself using. He meets Dr. Eve Sak (Jennifer Garner) who is running the trial and Rayon (Jared Leto) a druggie cross dresser who befriends him at the hospital.

Woodruff's desperation to live runs smack into the medical and drug industries who are hand in pocket with the FDA. The new experimental drugs are available in other countries, but not in the US because they are not federally approved. Woodruff's gets the idea to run the drugs up from Mexico and resell them to AIDS patients through a scheme to circumvent the laws. For a $400 monthly membership you will get all the drugs you need. It's because of these experimental drugs that Woodruff manages to survive 7 years. He manages to transport the drugs using various disguises and his club is a big success. Unfortunately he battles the FDA and his homophobic former friends.

The movie at times is all over the place, and even though it's a delight to see Jennifer Garner back on the screen she is sort of wasted in this film. What stands out besides the kinetic energy of McConaughey who is at once sympathetic and a jerk at the same time is the amazing Jared Leto. His portrayal of Rayon steals the movie every time he's on the screen. You can see and feel the pain, the suffering, and the need to live. His friendship with Woodruff should have been the biggest focus of the film. He should be on the short list for supporting actor this year hands down.
(Review by reesa)