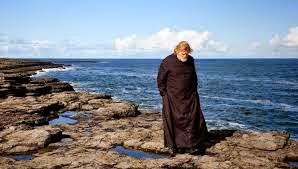 This movie would probably make the Pope very paranoid, but I found this very intriguing. Calvary is about a priest, when at confessional, is confronted by a man who enters the booth to tell the priest he will die in a week from today. I won't tell you why he says he will kill him, as I do not do spoilers. The movie goes day by day showing the layers being peeled back from this priest's character. Each day we know more and more about him, his past and the people who live in this small town it's portraying. I won't sugar coat it and I can tell this is a dark film and it touches on taboo topics that would make any priest feel uncomfortable; and I am glad the filmmakers went there to show a realistic, even though sometimes dark, look at a priest and how human, especially vulnerable, they can be. It was risky but I think it worked very well and that is credited to the directing. I liked the overall tone to the film and story, as it is something very different than what we typically see in a film about priest and religion. The acting from the supporting characters are fine but you see this movie for Brendan Gleeson as he is in nearly frame of this film as the broken priest. He does a fantastic job as his character arc goes from a calm, understanding priest to someone who is broken and shows we all have problems, even if you are a preacher of God. However, I have to point out Chris O'Dowd coming out of nowhere with a role that, as American audiences, have not seen before. He was dry, sometimes hilarious like we are used to, but also has a a lot of depth, emotionally, to his character. The film is shot very well for being about a small town with a really small church. There were a lot of shots of beautiful mountains through the breathtaking landscape Ireland, as well as the richness of the town that popped with great color. The movie runs at one-hundred minutes but it felt like two hours long. The middle dragged for me a bit but it wasn't unbearable by any means. I walked out asking myself if I liked it, and after thinking about it I did. I also said to myself I needed to see it again to make sure I liked it, and there was an appeal to it that makes want to go back and examine it. This was an interesting one to say the least. 7/10
(Review by Chase Lee)