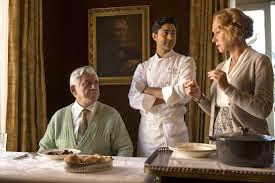 Everyone with social media is familiar with food porn. Those luscious pictures of delectable plates of food that people shoot with their iphones of their meals to share with the world. The popularity of the food channels exploring recipes and eateries is indicative of the increase of movies about food and the people who create them. Before the advanced screenings producers Steven Spielberg and Oprah Winfrey waxed on about the novel of the same name by Ricard C. Morais. Plus having Chocolat director Lasse Hallström and screenwriter Steven Knight (Locke, Eastern Promises) at the helm of the adaptation creates a feel good, but somewhat predictable culinary delight for summer family movie night.

The Kadam family move from their native India after their restaurant fire killed their beloved mother. She had been the inspiration for son Hassan (Manish Dayal) who thinks of himself as a cook rather than a chef. Relocating in England then in France they open a restaurant right across the street from Madame Mallory (Helen Mirren) who runs a Michelin One Star establishment that offers classic French cuisine. Having an Indian restaurant one hundred feet from her place instantly causes a battle of wills between the Madame and Hassan's Papa (Bollywood's institution, Om Puri). They do everything they can to stymie the other. Like buying up all the ingredients at the local open market so the other can't finish their menu's or endlessly lodging complaints to the mayor.

Meanwhile Hassan finds a Le Cordon Bleu book and is inspired to become the best chef instead of just a cook. He starts a flirtatious relationship with Marguerite (Charlotte Le Bon) who works at a sous chef across the street. She gives him more books, and food advice, but then later feels competitive when he becomes more successful. Papa also has to deal with the fact that Hassan needs to expand from their restaurant to explore the world and his place in it.

The lush photography of the French countryside and the sinfully enticing plates of food makes the movie a visual treat. The young leads are attractive and the chemistry between Madame and Papa resolves from annoying enemies to now great buddies are handled well by the quality of the actors involved. It's a lovely film with some amusing episodes, scenery, food fetish, and Indian music. As beautiful as it is to watch, it's just as easy to forget, but will leave you craving some Indian food afterwards.
(Review by reesa)