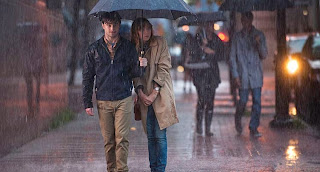 The quirky romantic comedy genre hasn't been the same since 500 Days of Summer. Many have come but few have captured the magic of that one. What If attempts to duplicate the sweet and dialogue heavy budding relationship tropes while trying to answer that age old question of whether men and women can truly be "just" friends. Director Michael Dowse (Take Me Home Tonight) and screenwriter Elan Mastai have adapted the play Toothpaste and Cigars by T.J. Dawe and Michael Rinaldi into a decent yet predictable journey as the two leads try to truly find each other. The Toronto skyline and locations are quaint and homey with just enough urban panache. Sort of looks like Seattle but with more style.

Daniel Radcliffe has done some many varied projects that his stint as Harry Potter has been pretty much erased as a stereo type. He plays Wallace who lives in his sister's attic, is a med school drop out and has a nowhere job writing technical manuals. He's introduced by his best friend Allen (Adam Driver) to his cousin Chantry (Zoe Kazan) at a party as they create refrigerator magnet poems. They fall into a quick witted conversation that makes Wallace believe there could be a chance for him until Chantry mentions she lives with her boy friend of 5 years, Ben (Rafe Spall). Chantry works as a graphic design animator while Ben is a lawyer. She enjoys the chemistry with Wallace and wants them to remain friends. Just friends. Of course since Wallace is a pathetic wuss, says yes just to be able to spend time with her as he tries to accept whatever she is willing to give him. They hang out together and talk about everything. She invites him over for dinner where her sister Dalia (Megan Park) hopes to hook up with Wallace as a rebound date. Ben scares Wallace in a good natured way about not trying to put his junk in Chantry's trunk. When Ben has to move to Dublin for his job, Chantry and Wallace end up spending for time with each other. Wallace tries to suppress his feeling for Chantry, while Chantry tries to ignore the spark between them.

It would be one thing if Ben was a bad boyfriend, but he seems to be decent guy with a good job who loves his long time girlfriend. He doesn't get super possessive as most guys who discover that their significant other is besties with a guy who is not gay. Chantry seems to want her cake and eat it too by keeping both men circling. It doesn't help that her cousin Allan and his new wife Nicole (Mackenzie Davis) try and force her together with Wallace because everyone can see their attraction except Chantry who refuses to admit it. This is a pleasantly awkward romantic romp that will you will want to make that Elvis sandwich, Fool's Gold, when you get home.
(Review by reesa)

Email ThisBlogThis!Share to TwitterShare to FacebookShare to Pinterest
Labels: What If review