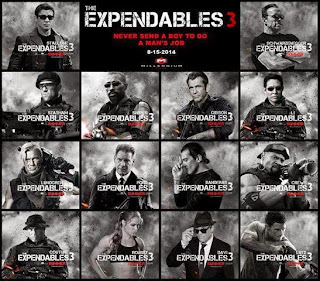 Yes, they are back. The bigger than life, tougher than bullets, able to Parkour from buildings in a single bound. Directed by Patrick Hughes (Red Hill) and written by Sylvester Stallone, Crighton Rothenberger and Katrin Benedikt, the new Expendable 3 has all the necessary elements including a despicable villain, lots of explosions, and a huge cast of mercenaries who each get their own specialized moment on screen. Nothing really new, just more of the same, different sets.

Stallone is Barney the leader of the group who tells the old team that they are disbanding after one of their own (Caesar – Terry Crews) is seriously wounded. The film opens with a train hijacking to release Doctor Death (Wesley Snipes), an original Expendable who has been imprisoned for the past 8 years. It's during their next job they got from CIA operations officer Max Drummer (Harrison Ford) where things went south with the appearance of Barney's old nemesis Conrad Stonebanks (Mel Gibson) who is supposed to be dead. So Barney doesn't want anymore of the team injured and tells them to find a life. Barney gets the help of Bonaparte (Kelsey Grammer) to act as a mercenary Human Resource recruiter to help him track down Stonebanks. They fly around the world accumulating special skills like the hacker Thorn (Glen Powell), a sharpshoter Mars (Victor Ortiz), bar bouncer Luna (UFC fighter Ronda Rousey) who is the close combat expert, and John Smilee (Kellan Lutz), former SEAL with bad attitude and an inability to follow orders. They also looked at but not take Galgo (Antonio Banderas who seemed to be channeling his Puss and Boots characterization) as a former Spanish Armed Forces sharpshooter who lost his team and can't seem to adjust to a normal life.

Arnold Schwarzenegger shows up as Trench Mauser again who assists the new team to start the mission. It doesn't go well for Barney and the kids when Stonebanks captures the young ones. Barney thinks he's going to save them on his own but his old team shows up to lend a hand and Galgo offers his help. Lee Christmas (Jason Statham), Doctor Death, gunner Jensen (Dolph Lundgren), and Toll Road (Randy Couture). Even Hammer, Trench and Yin Yang (Jet Li) contribute as the evac team where Arnold gets to say “get in the chopper”. The last big battle of Stonebanks and his ruthless army allows for each of the Expendables to feature their particular skill set. Equal opportunity showdown. Loud, impossibly ridiculous fighting scenes where the only bullets making their hits are against the bad guys. No wonder Stonebanks is so upset with his paid army.

One has to wonder that with the introduction of some younger players joining the team and hints that Smiley would be a possible replacement for Barney, the Expendable franchise will continue on ad nausem. For now the movies are pure escapism, easily forgettable, and a good excuse to put ageing action stars to work.
(Review by reesa)

Posted by Dallas Movie Screenings at 12:27 AM