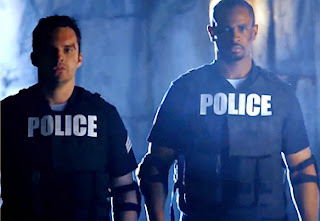 What would you do if you were a person pretending to be a cop? I can tell you I wouldn't make it far because it's illegal and I would get caught within a matter of minutes. Let's Be Cops is directed and co-written by Luke Greenfield who directed one of my favorite underrated comedies, "The Girl Next Door". With comedies I have always said it depends whether it's funny and, more importantly, entertaining. I have to admit that I was holding my gut in a few parts and sometimes I saw the joke just putter away and not really land; but I will give credit in saying Greenfield captures the realistic violence feel very well considering these are average guys in real police situations. Like I mentioned, when the comedy hits it hits, but sometimes they didn't have to try to hard as they did a few times. Overall the tone with the comedy is consistent, personally some jokes didn't hit with me, and the action scenes were handled well. I commend you Greenfield. Jake Johnson and Damon Wayans Jr. Are very good in the leads and their chemistry is like peanut butter and jelly. It's just that good. You can tell these guys have been friends for awhile, and it also helps when you are in a television show together, "New Girl". Their comedic timing is just as strong in the movie as the television show. The supporting cast is good but the one standout is Rob Riggle. He usually plays the comedic, sometimes over the top, characters but in this he played the everyday straight man. It was different but it worked and I wouldn't oppose to see him in more roles like this, even though I like his comedic, sometimes over the top characters as well. The film is shot well when it's just people talking but what I liked the most about the cinematography was the action scenes. They were shot in a gritty, dirty realistic approach and it really added to what the characters were going through since they were average guys. Shootouts are something they probably aren't used to so they are frantic, as the camera and the editing. The movie is about an hour and forty-five minutes and the pace was good. I was entertained, regardless if I laughed a lot, and that will make any movie go by faster. This is a fun, sometimes gritty and realistic, comedy that I will think you enjoy. It's nice fantasy for all of us who have actually wanted to be a cop for a day. Side note: I wouldn't recommend doing that...as you know...it's illegal. We can dream can't we? 6/10
(Review by Chase Lee)


Let's Be Cops press junket in Dallas Texas
Video shot and edited by 43Kix Dallas Division...I take no credit for this video
I am around the 4:45 mark