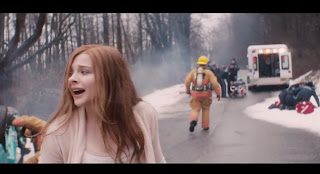 Young adult novels adapted for movies seems to be the trend. Teen angst when dealing with things like vampires, cancer, Battle Royale games, dystopian futures, and now deciding whether to stay in this world or not. The big uniting factor of course is the stars in their eyes love of their lives, all gooey, mopey and confused teenagers who of course are more than attractive and cinematically precious. Director R.J. Cutler (The Ordained and The September Issue) and screenwriter Shauna Cross have adapted the 2009 novel by Gayle Forman in one of the better of the batch of YA movies.

Mia Hall (Chloë Grace Moretz) has a blessed family. Her dad (Joshua Leonard) was in a rock band and her mom (Mireille Enos) used to be a riot girl. Dad gave up his music to teach English and mom became a travel agent so they can raise their family which includes her little brother Teddy (Jakob Davies). Mia early on has an affinity for the cello and the parents realized early on that she was indeed gifted. Dad even sold his drum kit to buy her a cello. Her devotion to her music makes her a bit of loner nerd, but Adam (Jamie Blackley), the cool cute rock guy in school is attracted to her dedication and the way she gets lost in her music. She doesn't quite understand it, but they decide to date. But as time goes by, his band and talent are being sought after and record labels come calling. Mia doesn't tell him that she is applying to Julliard which means a long distant relationship while their careers are pulling them in different directions threatening to rip them apart. Adam already suffers from issues of abandonment and reacts to trigger Mia's guilt. The rocker and classical girl...can it work?

All of this is told in flashbacks as Mia begins the movie in a coma after a horrible accident that takes the lives of her family. Her spirit wanders the hospital as family and friends grief and beg her to stay. Her life plays back to her as she weighs whether waking up an orphan will be worth the pain. Watching the grandparents, her aunt, and friends grieve, then there's that welcoming light that seems to beckon her is hard to handle. As with all big romantic tragedy stories, it's the boyfriend that is destined to be the deciding factor if she will stay.

This film could have gone either way but fortunately the cast performances are endearing and believable. Moretz proves she's more than just the Kick-ass girl. The parents are maybe too cool to be true, but their family life is enough for us to want to move in with them. Mia's best friend is what besties are all about. And Adam is dreamy and devoted, what's what not to love? It's so cliché and sentimental. Bring lots of tissues, definitely a three hankie movie.
(Review by reesa)

Email ThisBlogThis!Share to TwitterShare to FacebookShare to Pinterest
Labels: If I Stay review