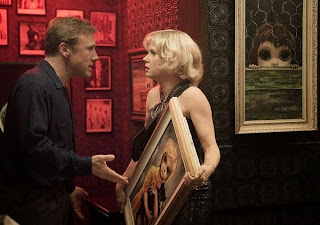 The earliest pulp culture phenomena coming out of the 50's has to be those colorful waif with humongous eyes. They were everywhere like Grumpy Cat is today. It's amazing that this strange story of Margaret and Walter Keane has taken so long to come to the big screen. At one point in 2008, Kate Hudson and Thomas Haden Church were set, then Reese Witherspoon and Ryan Reynolds. Fortunately Tim Burton took over as director and Amy Adams and Christoph Waltz became the inspired cast with a screenplay by Scott Alexander and Larry Karasewski. It's just not a story of art fraud, but of the abuse and liberation of women stuck in those sexist years.

Amy Adams is brilliant in the role of Margaret who begins the movie by running away from her suffocating marriage with her young daughter. They go to San Francisco, which was in the middle of the beat period in North Beach. She displays her art in the park with other painters selling caricatures for a couple of dollars. She meets the charming Walter Keane (Christoph Waltz) who is also displaying his painting of street scenes of Paris and flirting with the ladies. We woos Margaret with his tales of living in Paris studying art. For a sheltered and naive young woman, Margaret falls for his sweet talk despite the warnings from her friend DeeAnn (Krysten Ritter). When Margaret's first husband threatens to take away her daughter, Walther suggests they get married.

Walter is an opportunist and a salesman. He fails to talk Ruben (Jason Schwartzman) into displaying their art in his gallery. He talks the owner of the Hungry I nightclub into letting him display there but is regulated in the hall near the bathrooms. A fight ensues between the owner and Walter which gets splashed on the first page of the newspaper. The coverage goes viral for those times, and everyone wants to come look at the big eyed art that caused the ruckus. Dick Nolan (Danny Huston) a columnist, befriends Walter and feeds him information on celebrities to push the art. Margaret's painting prove to be successful, but she discovers that Walter is passing them off as his work. When a chance comes to own up to her work, her submissive mindset takes over and she finds herself living a lie to her art, to her daughter and to herself.

There is no doubt that Walter is a savvy businessman. He manages to pioneer the mass marketing of big eyed popularity by selling prints in grocery stores to gas stations. They even open an art gallery. But art critic John Canaday (Terence Stamp) abhors the synthetic sentimentality if the kitschy work that Walter passes off as high art. Walter manages to build a whole personality to support “his” work, while Margaret is holed up in her secret locked studio keeping up the charade. It takes years for Margaret to finally run off with her daughter to Hawaii, where she turns to Jehovah Witnesses to finally come clean with her life. She sues Walter in the big climax of the film.

Burton displays the movie in an intense color palette that bathes San Francisco, Hawaii and Margaret's paintings. There are little Burton quirky moments when everyone around Margaret suddenly all have big eyes. Adams is a wonder as the struggling and timid Margaret and one can't feel empowered by her final comeuppance. Waltz as Walter is over the top and wonderfully manic. Tim Burton collected and commissioned work by the real Margaret Keane. This movie is a lovely tribute to an interesting woman.
(Review by reesa)