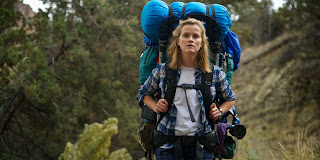 Reese Witherspoon has a particular charisma that makes her so popular on the big screen. She's got that sweet girl next door look, but with a steely disposition that can take care of business. Even when playing characters that seem like air-heads or woefully falling in and out of love, she manages to make herself connect with the audience. In this new feature directed by Dallas Buyer's Club Jean-Marc Vallée who successfully took one individual's journey in the world of HIV, he takes another real-life story of her experience on a trek of self discovery. It is written by novelist Nick Hornsby who adopted the screenplay from Cheryl Strayed's 2012 best selling novel Wild:From Lost to Found on the Pacific Crest Trail (PCT).

Cheryl (Witherspoon) begins her long hike at the beginning of the trail near the Mexican border. She stuffs her backpack with all her new equipment until it's so large that she can barely put it on her back. A novice at long term hiking she obviously is carrying more than necessary, and some of the stuff doesn't work forcing her to eat cold oatmeal for the first leg of the walk. The tale flashes back to what brought Cheryl to this point in life. The end of her marriage to Paul (Thomas Sadoski), the death of her beloved hippie mom Bobbi (Laura Dern), and a horrific spell with heroin and wanton sex. She is driven to the point where her life has to be rebooted. When she sees a book on a grocery store shelf about the PCT, she decides the 1,100 mile trail would be the best way to exorcise her personal demons.

Tracks with Mia Wasikowska was a similar story only across the deserts of Australia. A lone woman with camels tests herself against the elements. But it was hard to understand why she had to complete those hard miles with only her camels, aborigines, and a National Geographic photographer to keep her company. Cheryl walks, talks to her self, plays her life in her mind, letting her anger and forgiveness wash away until she can reach the main problem. At each trail log in stops where hikers make notes to each other of their journey, Cheryl writes quotes from her favorite writers which soon makes her almost legendary. Not many women hike the trail alone as she does. Hikers have regular places to refresh, have real food, collect their mail and make phone calls. Who knew that R.E.I. would exchange boots for her via mail to the next station because the ones she had were too small causing her to loose her toenails. There are some days she just wants to give it up. The harsh climates, the heavy load, the weird characters hiking out there threatening sexual harassment. Not mention wild life including a hallucinated fox. She stops and refreshes at small towns for a night in a motel room and a hot shower.

Witherspoon who also produced the film, leaves a good impression for the awards shortlist in this subtle, vulnerable, and intimate character. She brilliantly conveys with little dialogue the real angst and loneliness until she is able to love and forgive herself. It's a story that may not get you to physically walk that trail, but understand the necessity when she reaches the end of the trail at the Bridge of the Gods.
(Review by reesa)