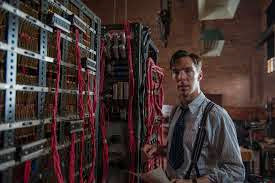 This is a solid film and Benedict Cumberbatch gives the best performance I have seen on film so far. This film tells the story of Alan Turing, who is hired during World War II to try and break the code for Enigma against Germany. This also results in the first machine to break that code, known today as a computer. So not having learned anything about Turing before I saw this, I really wanted to research him as soon as I got out of the film. It was made very well to where it heightened my curiosity on this whole subject and that typically means this is a good biopic. Director Morten Tyldum creates a tense and heartbreaking ride that never lets you go. The story is out of order and shows us a lot of flashbacks and develops Turing’s character, and it added more emotional weight showing out of order. Alan was a very quiet man about his feelings and the flashbacks helped us, as an audience; really understand why he shuts people out emotionally. Alan Turing was gay in real life and this is portrayed making it tense to watch because homosexuality was illegal back in the day, and you didn’t want Alan to get caught as he was trying to break Enigma. Tyldum makes Turing very human and shows us he was more than just a bright individual and more a person who just wants to be loved. With that vulnerability you need a great actor to pull this off, and this is where Benedict comes in. Benedict gives the best performance of his career. He gives Turing a lot of heart and wit and the last scene of this film is heartbreaking to watch. The rest of the supporting cast does very well. Keira Knightley, Mark Strong and Matthew Goode are all intriguing to watch and just elevate the movie on its performances. The cinematography is gorgeous and I have a soft spot for anything shot in the World War II era. The pace of this film is excellent and all the tension from breaking the code and having Alan hide the fact that he is gay, makes you sit at the edge of your seat. I felt like the ending was wrapped up very fast and that’s my only complaint. This is a solid film that is powered by fantastic performances and will possibly make you feel really depressed at the end. I definitely shed a tear. It’s not in my top ten, but this year is already way too competitive. 7.5/10
(Review by Chase Lee)