The Night at the Museum: Secret of the Tombs 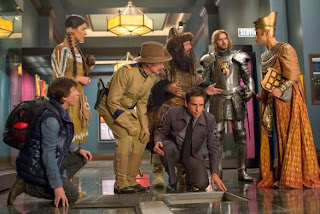 Director Shawn Levy who also did the two previous movies of the trilogy is back with more of the crazy antics of museum displays who come to life after midnight in the Museum of History. If you haven't seen the first one where a museum security guard becomes aware of the magical fun that ensues after midnight, it's probably advised to see them as this is really not a stand alone feature. Written by David Guion, Michael Handelman, Thomas Lennon and Robert Ben Garant, the story assumes you know why minifigured Roman Octavius and cowboy Jebediah are best if friends. The new movie needs the back stories for everything to fit.

Ben Stiller is once again Larry Daley a security guard at the Museum of Natural History in New York City. He organizes a special program where the bones of dinosaurs, the wax Theodore Roosevelt (Robin Williams), Attila the Hun (Patrick Gallagher), and Ahkmenrah (Rami Malek) all come to life to raise money for the museum. Unfortunately things go haywire when The Tablet of Ahkmenrah begins to deteriorate. Suddenly everything goes out of control. Larry's boss Dr. McPhee (Ricky Gervais) loses his job but helps Larry embark on the quest to save the magic tablet that is responsible for bringing history to life.

The movie is filled with silly moments hanging out with the familiar characters that were introduced in the other movies. Larry's relationships, especially with the Dexter the Capuchin Monkey that likes to slap him become bittersweet because if the tablet can't be saved then everyone will go back to being just a display. They are sent to the London Museum of History where they meet security guard Mindy (Rebel Wilson) who is attracted to Laa the Neanderthal who resembles Larry. They are also assisted by Sir Lancelot (Dan Stevens) who wants to take the Tablet to King Arthur in Camelot because he thinks it's the Holy Grail and he can reunite with his love Guinevere. Ahkmenrah is reunited with his parents the Pharaoh Merenkahre (Ben Kingsley) who tells them how to save The Tablet.

There are some fun set pieces in the movie like Octavius (Steve Coogan) and Jedediah (Owen Wilson) are stuck in a miniature Pompeii eruption. Or when Larry is chasing after the tablet through an MC Escher painting. Larry's son Nick (Skyler Gisondo) now older with teen mood swings adds to the father /son bonding moments. Things movie quickly, relying on the audience to know who is who as some of the characters that come along for the ride from the other movies really have nothing else to do but fill the screen. It's a movie if you need something to do after a day of Christmas shopping or Redbox rentals after the holidays.
(Review by reesa)

Email ThisBlogThis!Share to TwitterShare to FacebookShare to Pinterest
Labels: The Night at the Museum: Secret of the Tombs review