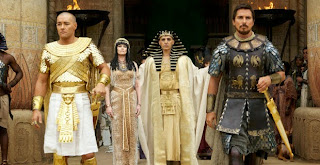 As the popularity of faith based films become more main stream, it's a short leap before big budget Hollywood extravaganzas will follow suit. Directed by Ridley Scott, known for Alien, Prometheus, and American Gangster tackles a Biblical tale of Moses leading the Hebrews from Egypt. For most people these stories are remembered from the Cecil B. Demille's The Ten Commandments with it's casts of thousands. Ridley's version is like a throw back to those old classics only on steroids. Bigger and badder special effects, same angst filled Moses and his jealous brother Ramesses II. It's an interesting retelling that is entertaining and visually stimulating and fortunately no 2x4 smack across the head with some religious message. Point in fact, there's really no message at all.

In 1300 B.C.E. Moses (Christian Bale), who was adopted by Pharaoh Seti I (John Turturro) after being found in a basket floating on the river was raised as a brother to Prince Ramesses II (Joel Edgerton). He is a respected general getting ready to attack the Hittite army before they attack Memphis. The Oracle (Indira Varma), who also delivers the funniest lines in the movie, tells the Pharaoh of a prophesy of a leader being saved and the savior becoming the leader. Ramsesses already has some issues with his father favoring Moses and ignores Moses suggestions for the battle plan. Which of course results in the prophesy coming to fruition. Seti I gives Ramesses a task to meet with the Viceroy Hegep (played with great swagger by Ben Mendelsohn) who oversees the Hebrew slaves. Moses sees up close the horrible conditions and saves one slave, Joshua (Aaron Paul) from a beating. He meets with the elder Nun (Ben Kingsley) who later tells him that he was really born from a slave.

After Seti I passes his throne to his heir, Hegep who was insulted by Moses' attitude towards him tells the new Pharaoh about Moses. Ramsses is jealous of his brother, he can't hide his fondness for him. So instead of killing him as Queen Tuya (Sigourney Weaver) urges, he exiles Moses from Memphis. Before he leaves he meets his birth mother and sister who tell him his real name is Moishe.

Wandering the desert he comes to Midian where he meets his future wife Zipporah (Maria Valverde) and they have a son Gershom. Ten years later, Moses is knocked unconscious from a rock slide and sees a burning bush and a boy called Malak (Issac Andrews) who tells him it's time to go back and lead his people out of slavery. His brother is happy to see that he has survived, but can't agree to Moses' plan on equal rights and pay for the Hebrews. Moses has little talks with Malak (which one side is overheard by Joshua, who should begin to question Moses' ability to lead) who tells him about the plagues that will affect Egypt and force the Pharaoh to capitulate to the demands. Which of course ends up in the great march out of Memphis with the Pharaoh's army in pursuit when he changes his mind.

There are some great chariot battle scenes, the the plagues are cool, the final chase across the Red Sea with the big wave threatening the final showdown. All edge of your seat stuff. The acting of course is good with the capable cast. This re-imagining is better than Noah and it's Lord of the Rings battling trees. But it still lacks something. At one point Moses, frustrated and losing faith, basically let's Jesus take the wheel and Ridley Scott must have done that too.
(Review by reesa)